The Benefits of Cultural Appropriation 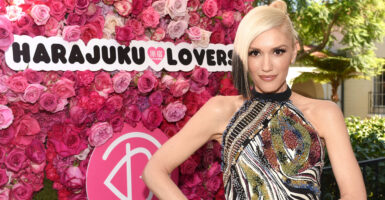 Can white people enjoy the fruits of another culture? To the modern leftist, the answer is simultaneously yes and no.

On the one hand, leftists say white people should be subjected to endless skin-deep diversity in the media. Every TV show, movie, and video game needs to have a mathematically precise percentage of minorities, or else it’s advancing white supremacy.

But anything further than that facade of multiculturalism is verboten. Attempts by whites to enjoy foreign cultures beyond passive spectatorship are met with swift accusations of “cultural appropriation.”

That term is stupid on its face, as cultures have always evolved by merging and mixing with each other, and there isn’t a culture on the planet—white or otherwise—that exists in a vacuum.

Stefani has a well-known affinity for Japanese Harajuku-style fashion that she incorporates into many of her songs and music videos. Harajuku is a neighborhood in Tokyo known for its cutting-edge youth fashion, a style Stefani has attempted to cultivate.

During an interview with the fashion outlet Allure, Stefani explained her fascination with Japanese culture.

“[T]hat was a culture that was so rich with tradition, yet so futuristic, [with] so much attention to art and detail and discipline, and it was fascinating to me,” Stefani said. “If [people are] going to criticize me for being a fan of something beautiful and sharing that, then I just think that doesn’t feel right … . [It] should be OK to be inspired by other cultures, because if we’re not allowed, then that’s dividing people, right?”

Those of us who aren’t predisposed to viewing everything through a race-obsessed lens could tell Stefani wasn’t saying she was literally ethnically Japanese, but rather implying that that culture had influenced her style and brand.

Still, the interviewer claimed the singer’s statements left her “unsettled” and that Stefani was engaged in cultural appropriation.

Stefani is not the first white person to be accused of cultural appropriation over incorporating elements of Japanese culture into their works.

Singer Katy Perry wore a kimono at the American Music Awards in 2013, which leftist rag The Atlantic said needed “to be called out.”

Meanwhile, Western video game journalists had an aneurysm over Ghost of Tsushima, a game set in feudal Japan made by an American studio.

In an article for Paste magazine, one “queer, indigenous writer” argued that the game was “a hokey, arguably racist approach to samurai aesthetic” and “in pursuit of … orientalist spectacle.”

For all the angry Americans screeching about how bad it is that white people dare incorporate Japanese aesthetics into their work, actual Japanese people seem thrilled that foreigners are embracing their culture.

An Al Jazeera piece detailing the Stefani controversy cited several Japanese people who were thrilled an American pop star was bringing their culture into the mainstream, while the government of Tsushima, a Japanese island, honored two senior members of the Ghost of Tsushima development team with honorary ambassadorships.

Clearly, the same people who are supposed to be so offended over this supposed cultural appropriation seem to be more than happy that the world is engaging with their culture. That’s clear to anyone who understands how normal, well-adjusted human beings act in the real world.

People want their cultures and values to spread. Culture isn’t some treasure to be hoarded by a woke dragon. Its richness is meant to be enjoyed by the world at large.

The Left used to understand this.

Many Americans can remember when the United States was defined as a melting pot of various ethnicities and cultures mixing together, bringing their unique histories and traditions to strengthen the nation.

That was considered a liberal position to hold, but it has since become gauche among the tweeting masses of the radical Left, who have devolved into the xenophobes and segregationists they claim to fight. We can’t let the whites and the Asians mix, after all.

Stefani did nothing wrong by engaging with Japanese culture, and others should be encouraged to engage with foreign traditions as well.

Those on the Left keep telling us diversity is our strength. Perhaps they should take their own advice.