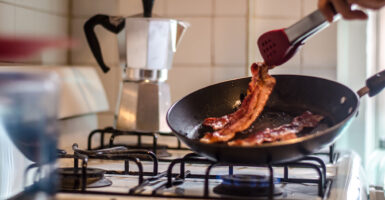 “Someone cooked this up,” Steve Milloy says of the Biden administration’s claims that gas stoves are a health hazard. (Photo: Rostislav Kuznetsov / EyeEm /Getty Images)

“Someone cooked this up,” says one expert of the Biden administration’s claims that gas stoves pose a health hazard.

Steven Milloy, author of multiple books including “Green Hell” and “Scare Pollution,” is one of several experts in energy, the environment, and public health who are calling the administration’s bluff on the danger of gas stoves.

“This is all part of the anti-fossil fuel movement,” Milloy, who is also the founder of the website Junk Science, said. “There’s no emission of a gas stove that is an allergen that would cause asthma.”

News broke earlier this week that the U.S. Consumer Product Safety Commission was considering creating regulations that would effectively ban gas stoves over concerns that research links harmful air pollutants to such stoves.

Trumka, a Democrat appointed by President Joe Biden, said a ban is possible because, as he told Bloomberg News: “Products that can’t be made safe can be banned.”

But the idea to ban gas stoves appears to have only been a flash in the pan. Americans, about 40% of whom use gas stoves, began expressing opposition to the ban, and now the leadership at the Consumer Product Safety Commission is walking its comments back.

“Research indicates that emissions from gas stoves can be hazardous, and the CPSC is looking for ways to reduce related indoor air quality hazards,” Alexander Hoehn-Saric, the chairman of the commission, said in a statement. “But to be clear, I am not looking to ban gas stoves and the CPSC has no proceeding to do so.”

Milloy says Americans don’t need to be frightened to fire up their gas stove because the appliances are “perfectly safe” and the warnings from the Biden administration are a “PR move meant to advance this anti-gas agenda.”

“America could go dark tomorrow, burn no more fossil fuels and remain that way for the rest of eternity, and it’s not going to affect global climate,” he said. “U.S. emissions are only 10% of global emissions, so you would still have 90% of emissions, so what will have been accomplished?”

The Daily Signal asked geologist Gregory Wrightstone, executive director of the CO2 Coalition, to explain why the Biden administration would even consider a ban on gas stoves and what the implications of such a ban would mean for climate.

Q: Is the research from the Consumer Product Safety Commission accurate to link asthma to gas stoves in homes? What type of gas do these stoves use, and where else is that type of gas used in day-to-day life in America?

A: Natural gas produced at the well-head is primarily methane (CH4), but typically has heavier hydrocarbons like propane and butane associated with it. These other hydrocarbons are stripped out of the gas, and the gas delivered for home use is almost pure methane.

Methane is a molecule made up of one carbon atom and four hydrogen atoms and is referred to as CH4. The end-product of the combustion of one molecule of methane is two water molecules (water vapor) and one molecule of carbon dioxide (CO2), neither of which are allergens nor are dangerous in the levels found in homes with ranges.

Q: Would eliminating gas stoves from every home and restaurant in America have an effect on climate change?

A: CO2 is a greenhouse gas and has a slight warming effect on global temperatures, although greatly exaggerated by the climate models used to predict dangerous levels of warming. Using the Model for the Assessment of Greenhouse Gas Induced Climate Change used by NOAA [National Oceanic and Atmospheric Administration] and the IPCC [U.N. Intergovernmental Panel on Climate Change], a complete elimination of U.S. CO2 emissions beginning in the year 2010 (impossible to achieve) would have only averted 0.041 degrees [Celsius] of warming by the year 2050. Since gas ovens only account for an incredibly small amount of CO2 emissions compared to the U. S. total, that already tiny bit of warming would shrink to an amount of warming indistinguishable from zero.

Q: If the Biden administration wants to address concerns over climate change, what is the most effective way to do that?

A: Concerns over climate change are being driven by unfounded fears of dangers from a non-existent climate crisis. Contrary to the mainstream media narrative of looming apocalyptic scenarios of unprecedented warming, the earth’s ecosystems and the human condition are thriving, prospering and improving. To wit: