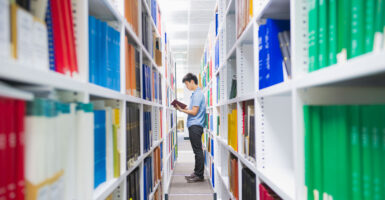 “All students at [the Granbury Independent School District] are loved and cared for by the amazing staff and administration,” school board member Courtney Gore said of age-inappropriate explicit books pulled from school libraries. “With that, public schools are not the place for young people to express themselves sexually.”  (Photo: Jacobs Stock Photography/DigitalVision/Getty Images)

A Texas superintendent is under investigation for trying to protect students from sexually explicit books in public school libraries.

The U.S. Department of Education has launched an investigation based on the American Civil Liberties Union’s complaint against the Granbury Independent School District and Superintendent Jeremy Glenn, which centers on the removal of controversial books, as well as related comments made by Glenn.

Texas parents “are becoming increasingly alarmed about some of the books and other content found in public school libraries that are extremely inappropriate in the public education system,” Abbott wrote. “The most flagrant examples include clearly pornographic images and substance that have no place in the Texas public education system.”

“I can’t overstate the type of damage it does to create a culture of shame and silence around LGBTQ topics,” said Vox Jo Hsu, an assistant professor at the University of Texas at Austin.

“I don’t think that little children should be shocked or disgusted by our identities,” argued a student from Granbury High School.

“All students at [the Granbury Independent School District] are loved and cared for by the amazing staff and administration,” board member Courtney Gore said. “With that, public schools are not the place for young people to express themselves sexually.”

While both sides are accused of pushing political agendas, few pause to consider the scientifically proven consequences of exposing children to sexual content.

Kaiser Permanente, a California-based health care company, says that a child having sexual knowledge beyond what is age-appropriate is a sign of sexual abuse.

“A 3-year-old child should not be able to describe in detail what happens during sexual intercourse,” said Kaiser’s website, which adds:

Young children who have firsthand knowledge of sexual acts likely have been sexually abused or have been exposed to sexual activity.

Caroline Giroux, an associate clinical professor and psychiatrist at the University of California at Davis Medical Center, argued early exposure to pornography can cause sexual trauma.

“Exposure to pornography is not trivial,” Giroux wrote, adding:

It can have traumatic effects leading to significant distress, disruptive behaviors, compulsive sexuality, and even suicidal attempts.

We have no excuse as a society to not invest resources in prevention of sexual trauma of any kind.

Jillian Schneider is a staff writer for The Lion.