A Modest Proposal on Where Tyrants Can Put Their Gas Bans 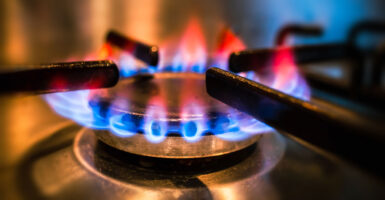 I support a woman’s right to choose whether or not to cook on a gas stove.

Such unlimited government is unnecessary, boneheaded, and none of these Democrats’ bloody business.

Moreover, this is dangerous.

Mandated electric stoves and heaters are merely tyrannical—until the power dies. Then stomachs growl while people shiver or schvitz inside blackened homes.

Natural gas is a second energy source during outages.

I learned this lesson during October 2012’s Hurricane Sandy.

A blackout plagued Manhattan from 40th Street to the Battery from Monday night, Oct. 29, until Friday evening, Nov. 2. Blessed with natural gas, I made tea and soup and heated takeout food.

When temperatures plunged that Thursday, I boiled a large pot of water. Within 10 minutes, my apartment was steamy and comfortable.

If Trumka, Hochul, and the other gasophobic monsters had their way, I would have been hungry and then very cold.

These Leftists don’t give a damn about everyday Americans. We are not sentient human beings worthy of their respect. Rather, we are revenue-generating blobs of protoplasm that they can boss around, as if we were pets. Barking orders is their favorite indoor activity. And if total control buys them a holier spot in Climatarian Heaven, even better.

My mild discomfort paled beside the victims of Christmas’ bomb cyclone. In Buffalo, at least nine of Hochul’s constituents without electricity froze to death in their homes. In February 2021, icy windmills stopped spinning. The Lone Star State became the No Voltage State. One 11-year-old boy froze to death in bed. Hypothermia killed up to 145 other Texans who lacked electricity.

This is Trumka, Hochul, and their comrades’ sadistic vision for America.

Their shiny new argument is that gas stoves are a health hazard.

Consumers have used gas stoves since 1826. Yet they started causing illness this week?

The authors of a 2013 peer-reviewed study in Lancet Respiratory Medicine examined data collected from 1999 through 2004. The subjects were 512,707 elementary and secondary school students in 47 countries. These researchers reported “no evidence of an association between the use of gas as a cooking fuel and either asthma symptoms or asthma diagnosis.”

I have had asthma since about age 10. No doctor has mentioned gas stoves as a contributor to my condition. Not a single time. Never. My superb pulmonologist has yet to utter the words “natural gas” in my presence.

Also, hundreds of millions of Americans have no kids or at least no small ones. Government should not oppress the childless on behalf of “the children.”

Finally, where are the gas companies? Where are their ads denouncing these idiotic, deadly policies? Why are they not organizing citizens to surround left-wing city halls, Trumka’s office, and Hochul’s headquarters to scream: “Bloody murder!”

The American Gas Association should be driving chefs to these places so they can holler: “Get your filthy hands off of our gas ranges!”

The chairmen of gas stove companies should be on the air screaming two words, and they are not “Good morning!”

Even cattle display more resistance as they are steered into slaughterhouses.

Instead, executives from gas companies and gas appliance manufacturers need to grow some vocal cords, stiffen their spines, and rush to the front lines. They loudly and forcefully should rally the American people to tell each of these officious, intrusive, know-it-all despots: “Take your gas ban and shove it!”