What Caused the Political Hysteria? 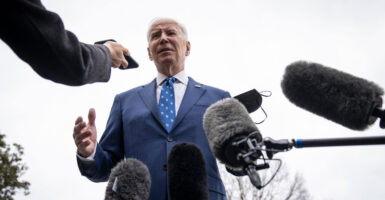 Commentator Victor Davis Hanson asks, "Given the current investigation following the Mar-a-Lago raid, should there also be a mirror-image special prosecutor to examine President Joe Biden’s lost stash of classified documents in his insecure office following his vice presidency?" Pictured: Biden speaks to reporters on the South Lawn of the White House Jan. 4, 2023, in Washington, D.C. (Photo: Drew Angerer/Getty Images)

The Left has gone mad over former President Donald Trump—past, present, and future.

The current Democratic Party and NeverTrump “conservatives” assumed that Trump was and remains so obviously toxic that they do not have to define exactly what his evil entails.

Accordingly, they believe that any means necessary are justified to stop him. And furthermore, these zealots, when out of power, insist such extraordinary measures should not be emulated and institutionalized by their opponents, much less ever boomeranged back upon their creators.

In this context, the Republicans retaking control of the House of Representatives once again raises the question of whether they should reply in kind.

Given the current investigation following the Mar-a-Lago raid, should there also be a mirror-image special prosecutor to examine President Joe Biden’s lost stash of classified documents in his insecure office following his vice presidency?

Can House Speaker Kevin McCarthy, R-Calif., ever be considered too inflammatory, given that his predecessor, former Speaker Nancy Pelosi, D-Calif., tore up the president’s State of the Union address on national television?

How many Democratic House members should be denied committee assignments to remind the Congress that Pelosi’s rejection of Republican nominees was a terrible precedent?

How many congressional subpoenas with threats of criminal prosecution and performance-art arrests should be issued to Democratic politicos to stop the criminalization of political differences?

In our current age, will all former presidents’ private homes, closets, and drawers now be subject to FBI raids to ensure that “classified” documents were not wrongly stored there?

Was it ever a good idea to impeach a first-term president the moment he lost his party’s majority in the House—but without any hope of a conviction in the Senate? Would such a similar impeachment send a warning to Biden to honor his oath of office and start enforcing U.S. immigration law?

Does a phone call now an impeachment make, on the grounds that Trump mixed domestic politics with foreign policy?

But was Trump’s Ukrainian call that much different from former President Barack Obama’s 2012 quid pro quo in Seoul, South Korea, where he asked the Russian president to convey a deal to Vladimir Putin: Stay calm and give Obama space during his reelection bid while Obama in turn would be flexible on missile defense.

Putin did just that and put off invading Ukraine until Obama was reelected. And Obama made sure there was no joint missile defense projects in Eastern Europe. Was that deal in America’s interest, or Obama’s own and thus similarly impeachable?

Or consider Biden mixing foreign policy and politics on the eve of the midterm elections. For example, he kept draining the Strategic Petroleum Reserve to dangerously low levels while begging hostile foreign dictators to pump more oil.

Thereby Biden sought to win votes from angry commuters buffeted by high fuel prices. And he also appeased the Left by not ordering more drilling for gas and oil. Was that gambit in the nation’s—or Biden’s—best interest?

What is wrong with the House investigating whether the FBI infiltrated and contracted social media companies to warp news coverage and suppress free expression of American citizens?

The Left certainly thought it was necessary in 1975 for the Church Committee to investigate the CIA. That committee found the agency was contracting new organizations to front for its covert operations, while partnering with telecommunications corporations to monitor the data of citizens on CIA watch lists. Sound familiar to today’s FBI?

Was it a good idea for the Democratic House to release Trump’s tax returns?

If the Republican House were to do the same with the Biden consortium’s tax records, would the result be far more incriminating?

There was much talk once in Congress of evoking the 25th Amendment to remove a supposedly mentally impaired Trump. A Yale psychiatrist was even paraded before Congress to attest the president was dangerously unbalanced. Calls for aptitude testing resulted in Trump acing the Montreal Cognitive Assessment.

Should the House now follow the Democrats’ precedent? Should medical professionals review all of Biden’s incoherent utterances, his fantasy biographic tales, and his often physical fragility and determine whether he is non compos mentis? Is that a precedent we wish to follow?

When a defeated first-term president leaves office and vows to return in four years, is it wise to impeach and try him as a private citizen?

Did not the House impeach Trump in part because he warned the Ukrainians that Biden, a possible opponent in 2020, was likely corrupt? Do the endless Democratic efforts to go after Trump, a possible Biden opponent in 2024, constitute far more than a Trump single phone call to the president of Ukraine?

Somehow supposedly worldly and sophisticated partisans in their self-righteousness ignored ancient laws of what goes around comes around, of Karma, of Nemesis, of payback’s a b—-, and all that stuff.