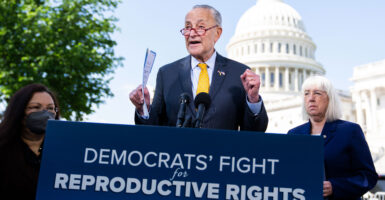 Sens. Tammy Duckworth, D-Ill. (left) and Patty Murray, D-Wash., look on as Senate Majority Leader Chuck Schumer, D-N.Y., speaks at a news conference outside the Capitol in support of abortion rights on May 19. Now, Duckworth and Murray are co-sponsoring a bill that would radically expand assisted reproductive technology. (Photo: Tom Williams/CQ-Roll Call/Getty Images)

In the final days of the just-ended 117th Congress, Democratic Sens. Tammy Duckworth of Illinois and Patty Murray of Washington introduced the Right to Build Families Act of 2022.

The bill would prohibit any legal limits on assisted reproductive technology. The bill failed to receive unanimous consent in December, but it’s on the docket for this new 118th Congress.

What is assisted reproductive technology? In federal law, it is “all treatments or procedures which include the handling of human oocytes and embryos.” This includes in vitro fertilization, commercial surrogacy, and other fertility treatments.

In short, the bill would overrule state laws that regulate or protect embryos used in IVF and commercial surrogacy. As Duckworth argued, “The choice to build a family is a fundamental right for all Americans.”

But this is muddled thinking. There’s no such thing as a “fundamental right” to a child per se, and it certainly can’t be invoked to trump the basic rights of others. A child, whose life begins at conception, is not a mere object to design, buy, or sell to fulfill an adult’s wishes.

Duckworth’s statement (and her own use of IVF) reflect the natural desire for offspring. That desire, however, does not justify creating children by any means necessary.

Since its inception, the fertility industry has been the Wild West of modern medicine. There are few federal guidelines on the use of embryos. None addresses commercial surrogacy. Instead, IVF and surrogacy laws tend to vary from state to state.

The use of embryos in IVF and commercial surrogacy touches the most intimate parts of a person’s life; namely, their deep longing for—and the uncertainty of—children.

At the same time, both IVF and surrogacy involve manipulating the creation and development of embryos. Such technologies that bear so directly on human nature and dignity deserve the utmost scrutiny—not the blanket removal of legal safeguards.

The Right to Build Families Act is the opposite of what parents, children, and the reproductive industry needs. IVF and commercial surrogacy outcomes are understudied, with little known about their long-term impact on kids.

What we do know shows many harms for prospective parents, egg donors, and commercial surrogates. And the children “built” through this process are harmed most of all. There’s a huge difference between no known harms and no harms.

If the Right to Build Families Act were to pass, it would undo even modest laws that protect women and preborn children.

Until recently, legislation related to assisted reproductive technology was rare. Now, however, the reproductive rights movement and LGBTQ advocates are shifting their focus to expand the technology.

Over the summer, Reps. Judy Chu and Adam Schiff, both D-Calif., proposed a bill that would redefine infertility to include same-sex couples and single persons. It failed, but the bill would have changed fertility from a medical diagnosis to a matter of sexual preference.

These may seem like benign—even compassionate—goals, but Duckworth, Murray, and Wasserman Schultz boast a long history of promoting abortion. That’s really no surprise.

The recent push to expand IVF and commercial surrogacy rights traces back to the pro-abortion and the LGBTQ coalitions, both of which have been quite hostile to the rights of children and the unborn.

Notably, the Right to Build a Family Act fails to define what a human embryo is. Nor does it discuss protections or rights for the embryo. The bill’s main focus is on fulfilling the wants and desires of adults.

In their press release, neither Senate sponsor acknowledged the many health concerns in IVF and commercial surrogacy. If “evidence-based information” is a priority, as the bill claims, then this seems like a major oversight.

Reports from the Centers for Disease Control and Prevention paint a grim picture. Children born via IVF face higher rates of autism, Down syndrome, birth defects, and preterm births.

Support for the bill comes from the American Society for Reproductive Medicine, Resolve: The National Infertility Association, and the Center for Reproductive Rights, to name a few. Each supports fetal reduction, embryo destruction, genetic testing, and sex-based selection.

These groups are also active in the pro-LGBTQ movement. Same-sex couples who want children have a special interest in IVF and commercial surrogacy—for obvious biological reasons. Ditto for anyone who has had sterilizing so-called gender-affirming surgery, or who became infertile through the use of puberty blockers and cross-sex hormones.

We should not allow our empathy for these Americans to blind us to the peril of artificial reproductive technology.

The Right to Build Families Act of 2022 is a step in the wrong direction. The last thing we need is to lose the legal guardrails we have now. Instead, Congress must push for laws that protect vulnerable parents and children.