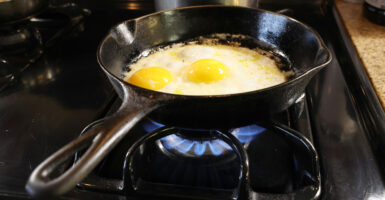 After a Biden administration bureaucrat suggested this week that gas stoves might be banned, the public backlash was so intense that there was immediate swift backpedaling on the idea. (Photo: Scott Olson/Getty Images)

To some, our public schools are the “nurseries of democracy.” It would be just as accurate to describe the administrative state as the nursery of despotism.

Not the cruel “blood and iron” despotism of silly-saluting dictators and their drab-is-fab troopers, but the semi-saccharine, overweening despotism that turns adult citizens into infants compliantly awaiting the next round of transfer payments.

Liberals often accuse conservatives of wanting the government in the bedroom, while they themselves are hard at work padding every other room in the house with layers of regulatory Bubble Wrap.

President Joe Biden, nanny-in-chief and amateur interior decorator, has some strong opinions on your home appliances. He has unleashed his bureaucrats into your kitchen, bathroom, backyard, and under the hood of your car with a steady stream of mindlessly meddling regulations.

Sure, gas stoves are the latest objects of scrutiny, but that’s just one data point in a trend. Your showerhead, they say, sprays too much water, so they have outlawed all but those that trickle. But don’t you dare take a longer shower to make up for it.

Similarly, Biden’s government is intensely interested in limiting the amount of water used in your dishwasher and washing machine.

The car parked in your garage is loud, polluting, and dangerous, so Biden’s bureaucrats have outlawed large engines and are pushing for all electric vehicles. Who wants to hear the rumble and roar of a classic American V-8 anyway?

The drones you fly for fun might be dangerous, too, especially if you’re a GOP voter (what a Biden bureaucrat might call “a domestic terrorist”). So, you can’t fly those in your backyard or at nighttime anymore.

If you’re a farmer, your tractor is an existential threat to the planet, so powerful tractor engines are also forbidden. Let’s hope you can afford an electric one, and that it can pull a cultivator for 12 hours straight on a single charge. Farmers, what’s your battery-to-acreage ratio?

This breezy tour of Biden’s new rules is confined to the four corners of your property. But outside of it, the administration’s unbridled enthusiasm for regulating you is just as strong. It reaches menthol cigarettes (which are somehow racist) and the information you’re required to consider when investing, because an institution as profligate as the federal government is a great source of financial advice.

Those rules are for your own health and safety, Biden’s bureaucrats say. What they don’t say is that they don’t trust you to make decisions for yourself even in minor, quotidian matters.

As noted above, the latest round of nanny statism comes in the form of a plan to ban gas stoves, maybe. We say “maybe” because after one of Biden’s meddling nannies said of them “any option is on the table. Products that can’t be made safe can be banned,” another backtracked saying, “I am not looking to ban gas stoves.”

The word the latter left unsaid was “yet.”

A certain legislator expressed enthusiasm for the ban and made her compelling case to the public: “Did you know that ongoing exposure to [nitrogen dioxide] from gas stoves is linked to reduced cognitive performance?”

Well, no, but we have heard anecdotal evidence that incontinent delegations of legislative power to bureaucrats are closely correlated with reduced cognitive activity in Congress. We’re still waiting on the National Institutes of Health’s definitive study establishing a causal link.

Instances like the gas stove dustup confirm the persistent fact that the administrative state’s expansion has not produced better government, unless “better” means “better at meddling.” But it has proved that whenever liberals add to their savior complex a smidgeon of bureaucratic power, they just can’t resist the temptation to save you from yourself.

This produces something a little like a government in “tiger mom” mode, except that the government doesn’t want you to excel, it wants you to obey. And then it wants to pat itself on the back.

Where a tiger mom might create excellence, a nanny state creates only a profound mediocrity—a mediocrity in which no one learns the responsibility that goes hand in hand with liberty, and instead is coddled into being a comfortably powerless child of the state.