Fact Check: Rep. Ayanna Pressley Claims Abortion Is ‘Out of Reach’ for US Minorities 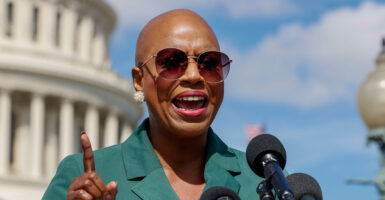 Rep. Ayanna Pressley, D-Mass., a member of the far-left “Squad,” celebrated the Biden administration’s unilateral decision to let retail pharmacies carry abortion pills—on the grounds that abortion has historically been “pushed out of reach” for minorities and the disabled.

Pressley’s comments stand as a living testament that every fact can be inverted when touched by woke ideology.

Pressley greeted the news that mifepristone, the first drug used to induce a chemical abortion, would soon be stocked at corner pharmacies by issuing the following press statement:

Abortion care is health care and a fundamental human right, and it’s imperative that we use every tool available to affirm it as such.

The [Food and Drug Administration’s] action to expand access to mifepristone will have a meaningful impact on folks’ ability to access the abortion care they need and deserve—especially for Black, brown, low-income, disabled, and other marginalized communities for whom abortion care has historically been pushed out of reach.

Medication abortion is safe and effective, and I am grateful the Biden-Harris administration has heeded our calls. This is the type of necessary, science-based executive action we need in this moment.

In New York City, more blacks are aborted than are born.

According to critical race theory, any statistical disparity proves an industry’s “systemic racism.” Yet when it comes to the abortion industry’s exploitation of minorities, the Left discards CRT’s doctrines like, well, like an inconvenient child.

Of course, one need not turn to CRT to learn of abortion’s racist roots (or anything else). Planned Parenthood founder Margaret Sanger was a committed eugenicist who founded The Negro Project to encourage black Americans to please stop reproducing. Alan Guttmacher, president of Planned Parenthood and founder of his eponymous institute, served as vice president of the American Eugenics Society.

To this day, modern white supremacists support abortion, with at least one prominent spokesperson demanding abortion be “mandatory” for “any miscegenated baby” (e.g., a child whose parents’ skin colors have differing hues).

Pressley also asserted that “low-income” women are denied abortions. This, too, turns the facts on their head. The No. 1 reason women give for abortions is financial insecurity. Nearly three out of every four (73%) women who has an abortion says their top reason is they “can’t afford a baby now,” according to a study from the pro-abortion Guttmacher Institute. A later Guttmacher study of 14 nations found “the most frequently cited reasons for having an abortion were socioeconomic concerns.”

Finally, Pressley claimed that “disabled” people are somehow underrepresented in abortions. Tragically, numerous families choose to abort a child based on a doctor’s erroneous diagnosis of “fetal abnormality.” The percentage of unborn children diagnosed with Down syndrome who are aborted in the United States ranges from 61% to 93%.

American women with the highest education proved more likely to abort than the less educated (and likely less privileged). In Europe, 88% of unborn babies diagnosed (correctly or erroneously) with Down syndrome are aborted. The trend is so well-established that The Atlantic published a story in late 2020 by Sarah Zhang titled “The Last Children of Down Syndrome.”

Pressley couched the Left’s legislative agenda in the language of diversity, equity, and inclusion, and hoped Americans would swallow it, although her every phrase inverts reality 180 degrees.

An accurate version of Pressley’s statement would read:

Abortion negates health care and violates fundamental human rights, and it’s imperative that we use every tool available to assure it becomes illegal, impractical, and unthinkable.

The FDA’s action to expand access to mifepristone will have a meaningful impact on folks’ ability to access the progesterone and nutrition they need and deserve in the womb—especially for black, brown, low-income, disabled, and other marginalized communities on whom abortion has historically been pushed out of eugenics by southern Democrats, northern Progressives, and Planned Parenthood.

Medication abortion is dangerous for women and always deadly for their children, and I am disgusted that the Biden-Harris administration has not heeded their well-being. This is the type of extreme, science-denying executive overreach we need to end this moment.