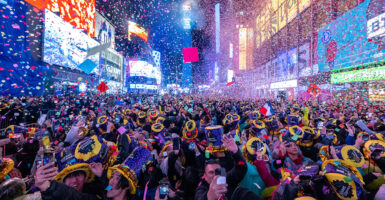 While we’d all like to think that the threat of Islamist terrorism is but just a bad memory, the machete attack on police officers in New York City’s Times Square on New Year’s Eve is a stark reminder that the possibility still looms.

On that evening, NYPD police said, a machete-wielding man identified as Trevor Bickford, 19, of Wells, Maine, injured three police officers who were on duty to protect revelers gathered in the rain to watch the iconic Times Square ball drop to welcome the new year.

Bickford, who was subsequently shot and wounded by police, faces charges of attempted murder, assault, and terrorism. He has been described as a self-radicalized, “homegrown violent extremist” with “pro-jihadist views” and reportedly desired to join the Taliban.

This is all deeply troubling.

International terrorism doesn’t get much ink in the news these days in comparison to national security challenges from the likes of Russia, China, North Korea, or Iran, but it’s still an area of concern.

For instance, did you know that U.S. and partner militaries conducted more than 300 counterterror operations in the Middle East alone last year, killing nearly 700 ISIS fighters? Who even thought that ISIS, also known as the Islamic State, still existed?

Indeed, some 30,000 ISIS fighters reportedly are imprisoned in Iraq and Syria who—if busted loose from captivity—could serve as the foundation for a revitalization of the world’s once-largest “terrorist army.”

ISIS also has terror branches, networks, and cells outside Iraq and Syria, including in Afghanistan, Pakistan, India, the Philippines, and in countries in Africa such as Nigeria, Somalia, the Democratic Republic of Congo, and Mozambique.

Another terrorist group, al-Qaeda, is also still around.

Although al-Qaeda’s threat to the U.S. isn’t what it used to be in the early days after 9/11, it still has significant terror affiliates around the world to advance its Islamist, anti-West agenda.

Take East Africa’s al-Shabab, which the State Department says is “one of al-Qaeda’s most dangerous affiliates,” and is killing “thousands of people, including Americans, in Somalia and across East Africa.”

Besides destabilizing East Africa, U.S. policymakers also are concerned about al-Shabab sponsoring terror attacks on the homeland. As a consequence, several hundred U.S. troops are now in Somalia.

Other al-Qaeda partners are found in the Middle East, South Asia, the Levant, the Maghreb, the Sahel, and the Arabian Peninsula—not to mention al-Qaeda’s long-standing ties to the Taliban in Afghanistan, where al-Qaeda leader Ayman al Zawahri was killed in a U.S. drone strike last July.

The debate will continue over whether these foreign terrorist groups’ aspirations are local, regional, or international—and, importantly, whether the U.S. homeland or American interests overseas are in the crosshairs of these terrorist groups.

But without question—even in an age of tense great power competition and frightening nuclear proliferation (e.g, Iran and North Korea)—the Biden administration needs to pay continued attention to local and regional terrorist groups, as their ambitions can change quickly to recruiting, training, and exporting terrorists.