Why Local Election Results in Taiwan Have Implications for America 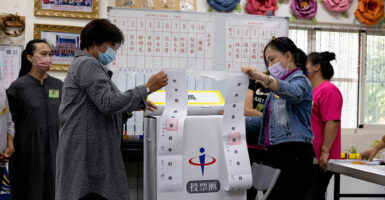 Taiwan has been one of America’s key allies in deterring Communist China’s power expansion. But recent local elections swayed in favor of Taiwan’s pro-China unification party. Pictured: Officials at a polling station in Majia Township in Taiwan are seen opening the seal of a ballot box to count votes for the 2022 Taiwanese local elections. (Photo: Hesther Ng, SOPA Images, LightRocket/Getty Images)

Taiwan has been one of America’s key allies in deterring Communist China’s power expansion since the end of World War II. But the failure of the ruling pro-independence party in recent local elections showed that even with U.S. political and military backing, the Taiwanese people’s concerns over a potential Chinese military invasion may have swayed election results in favor of Taiwan’s pro-China unification party.

Several weeks after Taiwan’s 2022 local elections, most analyses attributed the ruling Democratic Progressive Party’s losses to local issues, such as the spillover effect of a scandal involving a candidate’s fake degree, mismanagement of COVID-19 vaccine purchasing strategies, environmental issues, and a lack of transportation infrastructure.

It is true that local issues are generally the main drivers of voters’ behavior in local elections. Nevertheless, there is another angle in this elections story that specifically affects U.S. interests.

Taiwan’s relations with China are one of the main political divides between the Democratic Progressive Party, or DPP, and the opposition Kuomintang, or KMT, which won 13 of 21 city and county seats during the recent elections. Those 13 seats represent cities where roughly 70% of the Taiwanese people reside.

While the KMT is often labeled as pro-unification with China, the DPP is known for its pro-Taiwan independence leanings.

The DPP’s election emphasis on “opposing China and defending Taiwan” was insufficient to sway voters. However, voters could have been swayed by the KMT’s softer approach to Beijing and its campaign slogan, “Choose KMT and there will be no warfare in the Taiwan Strait.”

The war in Ukraine has served as a warning to the Taiwanese government about the devastating impact a Chinese invasion could have on the island’s economy. In response, the ruling DPP government extended military training for its reserve force from five to seven days annually to two weeks, beginning this year. It also proposed $19 billion in defense spending for 2023—a double-digit percentage increase from the previous year—in view of China’s incessant military harassment around the island.

But the effort to better equip the armed forces did not pacify Taiwanese voters. A survey conducted in September showed that 52% of respondents did not have confidence that the DPP was capable of defending Taiwan.

That lack of confidence also extends to the U.S. commitment to protect Taiwan. Even with America’s bulk arms sales and strengthening bilateral military ties, as well as President Joe Biden’s repeated pledges to defend Taiwan, only 44% of Taiwanese people in August believed that the U.S. would defend Taiwan against a Chinese invasion. That’s a clear decline from 65% in October 2021.

Concerns about a military conflict with China can also explain the paradoxical development of the Taiwanese people’s growing national identity but also their preference of the current “status quo” across the Taiwan Strait over the last few decades. Although most people identify themselves as Taiwanese and not Chinese, most of them do not choose “Taiwan independence” as an option for the future of Taiwan. Instead, 86% of respondents prefer maintaining the status quo in China relations, according to a survey in October.

It’s also notable that Taiwanese voters did not reward the ruling party for relatively steady economic growth over the past few years. Thanks to the government’s effective control of the spread of COVID-19 in the first two years of the pandemic, Taiwan’s economy has outshined most of its peers. Taiwan’s gross domestic product growth reached 3.4% in 2020, higher than China’s 2.2% and most other countries of the world.

Economic growth has been steady through the prolonged pandemic, estimated to be around 3.76% for 2022. The unemployment rate also has remained relatively low—it was 3.6% in October.

More importantly, as global capitals have struggled with higher prices in recent years, the inflation rate in Taiwan has been under control at 1.96% in 2021 and less than 3% in the first three quarters of 2022, according to Taiwan’s official statistics.

Apparently, the DPP did not get credit for their economic achievement, nor for strengthening Taiwan’s military defenses and U.S. support.

However, it is still too early to say what the outcome of Taiwan’s local elections will mean for Taiwan’s upcoming 2024 presidential election and the country’s general approach to cross-strait relations with China.

Indeed, the large number of Taiwanese who support the status quo with China are likely to restrain both the KMT and DPP from seeking either Chinese unification or Taiwan’s full independence. Still, the U.S. should keep an eye on the potential political landscape change in Taiwan—a change that might trigger a new response from China and affect U.S. interests in the Asia-Pacific region.