‘60 Minutes’ Exhumes Environmental Doomsayer, 90, for New Round of Scaremongering 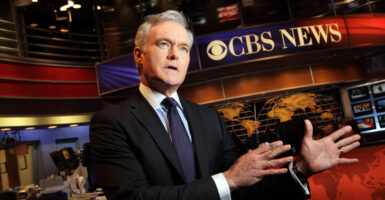 Earth is headed for a sixth extinction, warned biologist Paul Ehrlich on “60 Minutes” this past Sunday. And since Ehrlich has predicted about 20 extinctions over the past 60 years, he’s a leading expert on the issue.

Couldn’t “60 Minutes” find a fresh-faced, yet-to-be-discredited neo-Malthusian to hyperventilate about the end of the world? Why didn’t producers invite a single guest to push back against theories that have been reliably debunked by reality? Because the media is staffed by environmental pessimists and doomsayers who need to believe the world is in constant peril due to the excesses of capitalism.

And Ehrlich is perhaps our greatest alarmist.

His 1968 book “The Population Bomb” is among the most destructive of the 20th century. The long screed not only made Ehrlich a celebrity, but gave end-of-day alarmists a patina of scientific legitimacy, popularized alarmism as a political tool, and normalized authoritarian and anti-humanist policies as a cure.

Ehrlich’s progeny are other media-favored hysterics by other anti-humanists, such as Al Gore or Eric Holthaus or Greta Thunberg, who skipped learning history and science because she also believes we are on the precipice of “mass extinction.” And none of this is to mention the thousands of other Little Ehrlichs nudging you to eat insects, gluing themselves to roads, and demanding you surrender the most basic conveniences and necessities of modernity.

“The battle to feed all of humanity is over,” the opening line of “The Population Bomb” reads. “In the 1970s, hundreds of millions of people will starve to death in spite of any crash programs embarked upon now,” Ehrlich wrote. It was likely, he went on, that the oceans would be without life by 1979 and the United States would see its population plummet to 23 million by 1999 due to pesticides.

“The death rate will increase until at least 100-200 million people per year will be starving to death during the next 10 years,” he famously told Mademoiselle in 1970.

When Julian Simon offered the biologist his famous wager, Ehrlich responded by saying, “If I were a gambler, I would take even money that England will not exist in the year 2000.” Instead, Ehrlich picked five natural resources he believed would experience shortages due to human consumption. He lost the bet on all counts, as the composite price index for those commodities, copper and chromium and so on, fell by more than 40%, despite there being 800 million new people during that time.

It’s not merely that Ehrlich is always spectacularly wrong about the future but that he remains unrepentant. In 2009, Ehrlich argued that “perhaps the most serious flaw” in “The Population Bomb” was that it was “much too optimistic” about the future. “We will soon be asking: is it perfectly OK to eat the bodies of your dead because we’re all so hungry?” Ehrlich warned in 2014. One year later, there were 200 million fewer people suffering from hunger than in 1990, despite there being 2 billion more people inhabiting the Earth.

And much like today’s environmentalists, Ehrlich offered a slew of authoritarian economic prescriptions to salvage the Earth. In 1977’s “Ecoscience,” a book he co-authored with Barack Obama’s future “science czar” John Holdren, Ehrlich toyed with the idea of adding “sterilant to drinking water or staple foods” and compelling abortions to save the world from human beings.

How could “60 Minutes” frame this ridiculous man as a foremost expert on the future?

It would take a lot of work to point to any tangible factor that’s worsened for humans since the 1970s. There is less war, terrorism, poverty, hunger, child mortality, genocide, death due to weather, illiteracy, etc. By nearly every quantifiable measure, the environment is also better now than it was 55 years ago—which is why contemporary alarmists have learned to prophesy “climate” catastrophes 30 or 40 years out.

Perhaps Ehrlich’s biggest mistake was living long enough to be proven wrong dozens of times. (Then again, in 1932, the year he was born, a man could expect to live to 61. Today, they will likely live to be 77. Dr. Doom is 90.)

Fears about “overpopulation” are regularly cited by journalists—who often live in the densest, yet also the wealthiest places—as if it’s one of the world’s most pressing problems, like the threat of war or the election of Republicans. Every hurricane, tornado, and flood is treated as the opening of the Seventh Seal.

The media will seek out the struggling commercial fisherman but fail to speak to any of the billions of humans in developing nations whose lives have dramatically improved in virtually every aspect over the past decades. While we hyperventilate over Elon Musk or Kanye or elections, and scary climate disasters, scientists have made one of the most exciting energy breakthroughs in our lifetimes, perhaps in history.

They always do. We may have many problems in our spiritual lives or our political lives, but human ingenuity has dependably overcome demand.