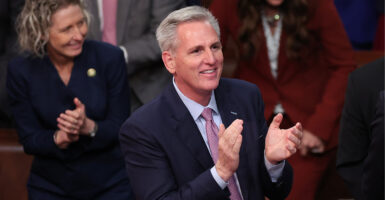 Republican leader Kevin McCarthy, R-Calif., applauds in the House Chamber during the fourth day of elections for speaker of the House at the U.S. Capitol Building. (Pictured: Win McNamee/Getty Images)

Republican leader Kevin McCarthy is inching closer to the speaker of the House position after 15 Republicans changed their votes in his favor on Friday.

“From the beginning, I’ve been clear that restoring fiscal sanity to Congress is my top priority. It’s crucial for the next Republican Speaker to leverage every tool at his disposal to cut spending, balance the budget, and start paying down our massive levels of debt,” Norman said in a press release.

“The status quo is failing our nation. We cannot continue the reckless spending and borrowing on the backs of our children. That’s why I am pleased to have reached an agreement with Rep. McCarthy on concrete steps he will take to fix our budgeting and appropriations processes, as well as much needed rules changes in the House,” Norman also said. “While this has not been an easy process, I’m confident this agreement will place us on an excellent trajectory, and I look forward to working with Speaker-designate McCarthy as we move forward.”

Norman believes McCarthy will win the speaker of the House position because of Harris switching his vote in favor of McCarthy as well as Rep. Ken Buck, R-Colo., and another Republican coming to vote.

“The other thing … the conference has spoken, and it was not fair. When we had 20, that was very substantial, but it kind of, we were not adding numbers of people coming to our side, and there is a point that you not hold the conference hostage,” Norman told The Daily Signal in a phone interview on Friday. “And so, we did what we did, 14 of us decided to vote for Congressman McCarthy, and we’re two short, but we’ll get those tonight.”

“My vote hinges on making negotiations in good faith, which are still pending. There is a once in a lifetime negotiation in the works that changes the very foundation on which Congress functions,” Luna said in a statement. “Please trust that I will always put you first. All of this will be disclosed to the public soon and I am pushing to make that happen.”

“These changes will outlive us all and will help restore power back to the American people – which is the only way I will vote for a deal,” Luna also said.

A total of 218 votes is required to win the speakership if the full House is present.

“My vote that was cast today is pending the approval of the agreement that has been negotiated in good faith. After days of intense deliberations, I cast my vote today for Kevin McCarthy for Speaker after he agreed to conservative reforms to how the House of Representatives operates,” Brecheen said in statement that was sent to The Daily Signal.

“What we have agreed to is transformative and will allow conservatives to rein in out-of-control spending. As I have said before, I did not come to Washington to preserve the status quo. I came here to reform Congress and fix the reckless spending that has plagued our country. I believe this agreement will help put us on the right track,” Brecheen also said. “Despite earning the support of 14 conservatives who previously opposed McCarthy, he still came up short. I will vote for Mr. McCarthy as long as what we agreed to in negotiations remains in place.”

Donalds, who had been nominated for the speaker position a number of times in the last few days, tweeted:

Over the past several days, I’ve worked alongside Speaker Designate [Kevin McCarthy] and several of my colleagues in good faith to ensure accountability, representation, and commitments from House leadership in the 118th Congress. The progress we’ve made is significant.

What we’ve witnessed is monumental and a testament to how government should function in our Constitutional Republic. As we continue negotiations, I’m confident our conference is positioned to get the ball over the finish line.

The Speaker’s Office must work for We The People, and I believe the concessions we’ve secured achieve this. Republicans are ready to govern and deliver results on behalf of our constituents and the nation.

This is a breaking news story and may be updated.

Editor’s note: Article was corrected to reflect Clyburn is a Democrat.