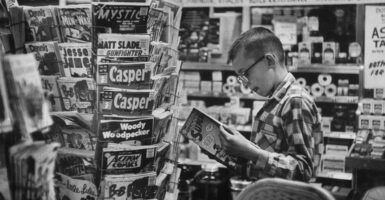 It's safe to say that the "Superman" in the comic book that the young boy is browsing in this 1956 file photo is not the father of a bisexual son leading climate change protests. (Photo: Carl Iwasaki/Chronicle Collection/Getty Images)

Did you know that Superman’s son is bisexual? So is Batman’s sidekick, Robin, and lots of other superheroes created by Marvel and DC Comics.

The author of the bisexual Superman story says gay people write to say they “burst into tears” when they saw that the characters had become gay.

While it’s nice to make LGBTQ+ people feel more welcome in the world, not everyone is happy. They became bisexual “out of nowhere!” complains comic creator Eric July in my new video. “They make it seem as if the only way that you can relate to a character is because you’re gay and that character’s gay, which is nonsense!”

July, who is black, says you don’t have to share the same traits as a superhero to enjoy the character. His favorite was Batman. “I ain’t got Bruce Wayne money, and I’m not rich! And I’m certainly not white.”

July points out that there have long been gay comic superheroes, like Northstar. But what’s new and dumb is that DC and Marvel are changing the identity of established characters.

A new Batman is black. There’s a new Spider-Man-like character, except she’s a lesbian who uses a wheelchair. Iron Man is now a black teenage girl. Really.

Maybe this is progress.

“When I was a kid,” I say to July, “all the characters were white. It’s a good thing more are non-white.”

“But they’ve been just reduced to being an item to pander to certain audiences that aren’t really buying into it,” July responds.

“They turned off their audience by … hyper-emphasizing the social justice element,” says July.

The cover of a Superman comic shows Superman’s son leading a school “strike for climate.”

It’s so stupid! Superman, with all his powers, could solve climate change all by himself. But now he holds a protest sign.

“These guys are writing material for their peers,” says July. “So, even if the Son of Superman falls completely off the charts like it did, right? It’s still a win in their mind.”

I thought that capitalism would be a break on the silliest of the woke world. But in this case, they’re just sabotaging their own projects. The bisexual Superman series was canceled after 18 issues.

“Snowflake is nonbinary and goes by they-them,” says the writer in Marvel’s video introducing the characters. Fan reaction to the preview video was pretty bad. Marvel decided not to release Snowflake and Safespace.

I wanted to ask Marvel and DC why they seem fine with losing market share. Aren’t their investors angry?

Neither company would talk to me.

The market will decide if people want to pay for new characters like him.

But July understands something that Marvel and DC apparently no longer do: Capitalism means giving people what they want.