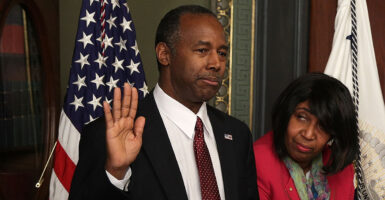 The Detroit school board recently voted to remove Dr. Ben Carson’s name from his namesake high school. The reason: He served in President Donald Trump’s Cabinet. Pictured: Carson is sworn in as the Secretary of Housing and Urban Development for the Trump administration with his wife, Candy, at his side on March 2, 2017, in Washington, D.C. (Photo: Alex Wong/Getty Images)

David L. Sokol is a business executive, co-author of the 2022 book “America in Perspective,” and chairman of Teton Capital, LLC, and ATLAS Corp.

The Detroit school board recently voted to remove world-renowned neurosurgeon and native son Dr. Ben Carson’s name from its Benjamin Carson High School of Science and Medicine magnet school. The reason: Carson served in the Cabinet of President Donald Trump.

Before it was scrubbed, the school’s website glowingly stated why it was named after Carson:

The school is named in honor of the acclaimed Detroit-born, African-American pediatric neurosurgeon Dr. Benjamin Carson. As a pediatric neurosurgeon formerly on the staff of Johns Hopkins Hospital, Dr. Carson was honored with the 2008 Presidential Medal of Freedom for his contributions. The school aims to honor the contributions Dr. Carson has made not only to the global medical community, but also as a role model for Detroit students with aspirations and interests in science and medical fields.

The website also pointed out that “over 99% of our students graduate” and that the school “is a safe school with a strong college-going culture.”

So, what has caused such an underperforming school district to remove the name Benjamin Carson from its best-performing high school?  Wokeness and cancel culture, plain and simple.

Was Carson accused of committing a crime? Did he make some outrageous statements? Of course not. His sole offense, as stated by former and current Detroit school board members Lamar Lemmons and Sherry Gay-Dagnogo, is that he had the audacity to agree to be the secretary of the U.S. Department of Housing and Urban Development under Trump.

Think about that. Volunteering to serve your country in the important role of a Cabinet secretary negates all of your prior accomplishments, disqualifies your name from being on a school building, and erases you as a role model to disadvantaged youth.

This insane decision explains why the Detroit school district ranks among the worst-performing districts in America. Detroit school board members would rather play politics and be woke than focus on the urgent need to teach the district’s young men and women reading, writing, and arithmetic.

The Detroit Free Press in a May 18, 2021, article pointed out that “Detroit Public Schools’ students recently won the award of the worst math scores in the National Assessment of Educational Progress’ 40-year history.”

Parents who actually care about their children’s education must retake the school board, or else students will continue to receive an inferior education.

Any school district in America should welcome the opportunity to have such an amazing American as Carson serve as a role model for their students. He and his brother were raised by a single mother who was a domestic worker in the poorest part of Detroit. She emphasized to her boys the importance of a good education, hard work, and determination.

From the humblest of beginnings, Carson became a world-renowned neurosurgeon, and his brother became an accomplished physicist. His mother kept them focused on achieving their American Dream and rejecting the victimhood being spewed by charlatan black politicians.

Dr. Ben Carson is among the kindest, gentlest, and most well-intentioned people whom I have ever had the pleasure of knowing. This slight by the Detroit school board demonstrates just how harmful cancel culture and wokeness truly can be—harmful not only to the target of that cancel culture but to all the children who would benefit if the school board focused its energy on providing a quality education rather than on being woke.