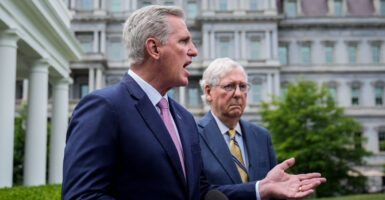 In just two weeks, Republicans will control the U.S. House of Representatives. They’ll be able to conduct oversight of the Biden administration that’s badly needed after two years of unified Democrat government.

And yet, even before House Republicans get the gavel, they are about to lose their leverage to hold the Biden administration accountable.

Why? At least 10 big-government Senate Republicans are likely to join Democrats to approve the massive $1.7 trillion omnibus spending bill in Congress this week.

Doing so would undermine one of the House GOP’s campaign promises. When rolling out the “Commitment to America” in September, Republican Leader Kevin McCarthy, R-Calif., made government accountability a core pillar of the plan.

House Republicans promised “rigorous oversight to rein in government abuse of power and corruption, provide real transparency, and require the White House to answer for its incompetence at home and abroad.”

McCarthy boasted in September: “On that very first day that we’re sworn in, you’ll see that it all changes. Because on our very first bill, we’re going to repeal 87,000 IRS agents. Our job is to work for you, not go after you.”

Before they even have an opportunity to pass that IRS bill, however, Senate Republicans will be handing President Joe Biden a huge Christmas present: $1.7 trillion to fund the government, including money for the very same weaponized IRS that Republicans promised to put a leash on.

Withholding money from Biden’s corrupt agencies is a good place for the House GOP to start—particularly if those agencies are uncooperative or not forthcoming with information in the new year.

“The primary method that Congress can use to hold federal agencies accountable is via appropriations,” says Paul Winfree, former budget policy director for President Donald Trump and a distinguished fellow at The Heritage Foundation. “They should not be appropriating until they’ve figured out just how to use their oversight powers.”

Giving up that power now is pure negligence. It would insulate the Biden administration from oversight for the next year. Think about the consequences: From now until the fiscal year ends on Sept. 30, 2023, Republicans would be powerless to carry out their oversight agenda.

This is precisely what Republicans have complained about during the Democrats’ control of Congress during Biden’s presidency.

“Over the last two years of Democrats’ one-party rule in Washington, House Democrats have not lifted a finger to engage in oversight and accountability of the Biden administration’s actions and abuses of power,” McCarthy said Dec. 6 when rolling out the GOP’s oversight agenda. “The American people responded this fall by electing a Republican majority in the House of Representatives to stand up for their interests.”

McCarthy won’t be able to do much if he’s not holding the purse strings.

To his credit, McCarthy is strongly opposed to the $1.7 trillion spending measure. Last week, during an appearance on Fox News, he reportedly angered his Senate counterparts for speaking out against it.

“They’re trying to jam us right before Christmas. Why would you ever move forward when there’s a change in power in 21 days where Republicans would have a stronger hand?” McCarthy said Dec. 13. “We wouldn’t be talking about adding more money. We’d talk about decreasing.”

So what do Senate Republicans say about this malfeasance? After all, to overcome a Senate filibuster, Democrats need at least 10 of their Republican colleagues to support the measure. In other words, nothing passes without Senate Republicans’ support.

Senate Minority Leader Mitch McConnell, R-Ky., not surprisingly, already signaled his support for the $1.7 trillion bill, stating last week, “If a truly bipartisan full-year bill without poison pills is ready for final Senate passage by late next week, then I’ll support it.”

And then there’s retiring Sen. Richard Shelby, R-Ala., a former Democrat who never met a spending bill he didn’t like. Shelby believes he’s doing House Republicans “a favor” by passing the bill now.

“If we’re successful, we’ll have probably done them a favor,” Shelby told Politico. “There probably won’t be much thanks for it.”

There shouldn’t be any thanks for McConnell, Shelby, and the other big-government Senate Republicans. With friends like them, who needs an opposition party?

They are handicapping their House Republican counterparts just weeks after voters put the GOP in power with a promise to hold Biden accountable. They’re also undermining the will of voters.

The House GOP oversight agenda is ambitious—and right on target. It includes an investigation of Homeland Security Alejandro Mayorkas’ failures leading to the border crisis, the government’s collusion with Big Tech to censor speech, the origins of COVID-19, Hunter Biden’s corrupt business dealings, the disastrous withdrawal from Afghanistan, politicization of the FBI, the administration’s promotion of critical race theory, and many others.

By voting for the $1.7 trillion spending bill, Senate Republicans would do their House counterparts no favors, sacrificing their leverage on all those investigations and more by giving Biden and Democrats exactly what they want—money to continue on, unaffected, for another year.

There’s no reason to rubber-stamp this spending bill now. If just 41 of the 50 Senate Republicans say no, they can ensure their House counterparts have all the tools they need to conduct the much-needed oversight and hold the Biden administration accountable.