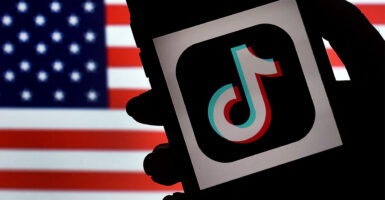 Gallagher, who is set to become the chairman of a forthcoming Select Committee on China in the next Congress, added:

Allowing the app to continue to operate in the U.S. would be like allowing the U.S.S.R. to buy up The New York Times, Washington Post, and major broadcast networks during the Cold War. No country with even a passing interest in its own security would allow this to happen, which is why it’s time to ban TikTok and any other CCP-controlled app before it’s too late.

Krishnamoorthi said in a statement that the ANTI-SOCIAL CCP Act—the Averting the National Threat of Internet Surveillance, Oppressive Censorship and Influence, and Algorithmic Learning by the Chinese Communist Party Act—”is a strong step in protecting our nation from the nefarious digital surveillance and influence operations of totalitarian regimes.”

At a time when the Chinese Communist Party and our other adversaries abroad are seeking any advantage they can find against the United States through espionage and mass surveillance, it is imperative that we do not allow hostile powers to potentially control social media networks that could be easily weaponized against us.

“The federal government has yet to take a single meaningful action to protect American users from the threat of TikTok,” Rubio, vice chairman of the Senate Select Committee on Intelligence and outspoken critic of the Chinese Communist Party, said in a statement on Tuesday. “This isn’t about creative videos—this is about an app that is collecting data on tens of millions of American children and adults every day.”

“Senator Rubio and Congressman Gallagher’s bill will do what the Biden administration has failed to do up to this point by endless negotiations with TikTok that will never bring to fruition a true separation from its CCP connections,” Carmack told The Daily Signal in an email.

“It goes beyond the focus of TikTok, importantly, by blocking and prohibiting transactions from any social media company with ties to China, Russia, and other countries of concern. Allowing foreign adversaries to be the ‘Wolf in the Henhouse’ to have connections to social media companies that absorb exorbitant Americans’ data with tools to amplify and potentially manipulate discourse in the United States is unacceptable,” Carmack added.

Brooke Oberwetter, a TikTok spokesperson, noted that millions of Americans love TikTok and use it for a variety of reasons including “[growing] their businesses” and “[connecting] with creative content.”

“It is troubling that rather than encouraging the administration to conclude its national security review of TikTok, some members of Congress have decided to push for a politically motivated ban that will do nothing to advance the national security of the United States,” Oberwetter told The Daily Signal in an email.

TikTok is loved by millions of Americans who use the platform to learn, grow their businesses, and connect with creative content that brings them joy. We will continue to brief members of Congress on the plans that have been developed under the oversight of our country’s top national security agencies—plans that we are well underway in implementing—to further secure our platform in the United States.

Several Republican governors have banned TikTok for state-owned devices, including Kristi Noem of South Dakota, Greg Abbott of Texas, Henry McMaster of South Carolina, Larry Hogan of Maryland, Kevin Stitt of Oklahoma, and Pete Ricketts of Nebraska, the Washington Examiner reported last week. Republican Govs. Spencer Cox of Utah and Kay Ivey of Alabama have since done so as well.

The White House did not immediately respond to The Daily Signal’s request for comment.