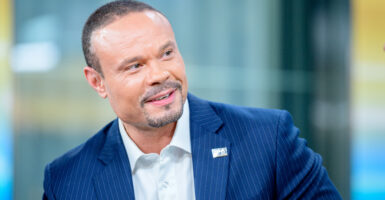 Journalist Bari Weiss revealed in another major Twitter Files update Thursday that Twitter operatives were suppressing the accounts of major conservatives like “Libs of TikTok,” Dan Bongino and Charlie Kirk.

Yet Twitter denied that it was suppressing or shadow banning accounts: in 2018, Head of Legal Policy and Trust Vijaya Gadde and Head of Product Kayvon Beykpour said that they “do not shadow ban” and they “certainly don’t shadow ban based on political viewpoints or ideology.”

This wasn’t true, according to Weiss. Twitter was actively shadow banning users based on political preference, referring to the practice as “visibility filtering” or “VF.”

Key targets included Stanford School of Medicine professor Jay Bhattacharya, who had argued that children would be harmed by the coronavirus lockdowns, tweeting remarks such as: “If the lockdowns accomplished anything, they harmed the old without protecting the young.”

Weiss said that Twitter “secretly placed” Bhattacharya on a “Trends Blacklist” to prevent his tweets from trending.

“Still trying to process my emotions on learning that @twitter blacklisted me,” the professor tweeted late Thursday. “The thought that will keep me up tonight: censorship of scientific discussion permitted policies like school closures & a generation of children were hurt.”

“I’m curious about what role the government played in Twitter’s suppression of covid policy discussion,” he added. “We will see with time, I suppose.”

But within six months of the meeting, Kirk began to notice “severe throttling” and unsuccessfully reached out to Twitter executives. He said it became much worse heading into the 2020 election.

Kirk said that since Elon Musk bought Twitter, he has see significant follower growth and engagement.

“Imagine the phone company gives you a cell phone,” Kirk told The Daily Signal on Friday morning. “You pick up the phone to call someone but it never connects. It only lets you talk to certain people. And what’s worse, certain other people can’t call you, either. The phone company knows which numbers you can call and who it will let call you, but just to be evil, they never tell you who will never hear from you again. Your phone would be basically useless.”

“That’s what Twitter had become,” he said. “It had become basically worthless. A warped and contorted echo chamber. A simulation that resembled speech, but instead it was the opposite. It controlled and manipulated which ideas the world was allowed to hear. I’m still reflecting on what we’re learning and finding out I was being directly censored by Twitter. I knew it was happening, but to see the screenshot with the suppression tags was startling.”

The Turning Point USA president expressed outrage that Twitter would presume to decide for users what they should see.

“We’ll never know exactly what they robbed from me personally, how they harmed the work I do at TPUSA, and how different the country would be had they never put their thumb on the scale,” Kirk added. “Is Trump president? Does the red wave materialize? These are fair questions given what we’ve learned. Musk should keep going and let the whole truth come out.”

According to Weiss, Twitter had “slapped” Bongino with a “Search Blacklist” label.

“We ALWAYS knew we were a target of the Twitter suppression machine,” Bongino tweeted Thursday night. “ALWAYS. Yet liberals insisted it was another ‘conspiracy theory.’ Tonight is vindication, yet I expect no apologies from liberals. They live to abuse power and they’ll make no apologies for doing so.”

Tom Nichols of The Atlantic was one such figure who claimed Bongino was expressing fake outrage over being shadow banned, Bongino told The Daily Signal on Friday.

“When’s the apology come for me?” Bongino asked Friday on Fox. “The answer is never. And you know why I’ll never get an apology? Because this is what communists and fascists do. They believe in hierarchy and totalitarianism and the brutal exerting of power over others and subjugating them. They’re not going to apologize for this. This is what they do. They relish authority and abuse of power. And they did it and they almost got away with it.”

“The account—which Chaya Raichik began in November 2020 and now boasts over 1.4 million followers—was subjected to six suspensions in 2022 alone, Raichik says,” Weiss tweeted. “Each time, Raichik was blocked from posting for as long as a week.”

“Twitter repeatedly informed Raichik that she had been suspended for violating Twitter’s policy against ‘hateful conduct,'” Weiss continued. “But in an internal SIP-PES memo from October 2022, after her seventh suspension, the committee acknowledged that ‘LTT has not directly engaged in behavior violative of the Hateful Conduct policy.'”

The Twitter committee justified suspending Libs of TikTok by “claiming her posts encouraged online harassment of ‘hospitals and medical providers’ by insinuating ‘that gender-affirming healthcare is equivalent to child abuse or grooming,'” Weiss said.