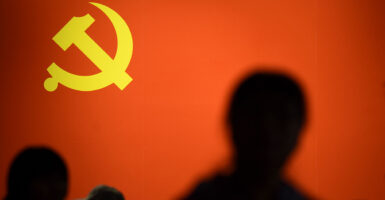 A bill before Congress would upend the nation's legal immigration system while benefiting China and inviting an immeasurable influx of new green card applicants. Pictured: The flag of the Chinese Communist Party is displayed Oct. 10, 2017, at an exhibition at the Beijing Exhibition Center. (Photo: Wang Zhao/AFP/Getty Images)

The House is about to debate a wrongheaded bill that is touted simply as a mechanism to speed up the availability of green cards for certain employment-based applicants.

But the bill, HR 3648, actually would upend the nation’s legal immigration system while benefiting China and inviting an immediate, immeasurable influx of new applicants to overwhelm the process.

Of course, Congress has yet to secure our southern border during the worst crisis of illegal immigration in our history. Beyond ignoring the spiraling border crisis, this legislation is ill-advised because it would create significant national security risks.

Titled the Equal Access to Green Cards for Legal Employment Act of 2022, or the EAGLE Act, the bill would provide an accelerated path for more Chinese Communist Party members to gain permanent residence in the U.S.

HR 3648 also would favor Chinese and Indian nationals for several years, to the exclusion of other foreign nationals, in employment-based immigration.

To ensure an orderly and manageable legal immigration system, Congress long has imposed annual numerical limits. A “country cap” ensures that all countries are treated equitably, and that one or two can’t disproportionately hoard every visa in a given category. Because nationals from China and India apply for far more visas than are available each year, they wait multiple years for a visa to become available.

The EAGLE Act would remove the country cap, create transition rules favoring certain employment-based categories. This would ensure that anyone, even those here on most temporary visas, could file for a permanent green card granting permission to reside and work in the U.S. if they have an underlying visa petition that has been approved for at least two years.

The bill sets out a bevy of complex math and statutory cross-references, but the result is clear: Chinese and Indian applicants would corner the market for employment-based green cards for the foreseeable future, and anyone with a 2-year-old approved petition would be able to file immediately for a green card without being subject to an annual numeric limit.

Where is the equity in that?

Under the legislation, once those green cards are issued, the clock would start for naturalization. Once they are naturalized, they may begin sponsoring family members to come to America. This is chain migration at its purest. This bill is not a move toward merit-based immigration.

Quite the opposite, the bill would provide green cards to those who have been waiting for their bite at the apple simply by being in line, not by earning it. The end result would be an immediate, incalculable number of applications for employment-based green cards followed by an immeasurable boom in family-based petitions in seven to 10 years.

The immigration consequences of this bill pale in comparison to the national security threats that America will witness as the Chinese government redoubles its efforts to spy on corporations and educational institutions. It is well known that Communist China actively steals domestic intellectual property and corporate trade secrets.

The Chinese are adept at using our immigration system against us to install people in sensitive places, and enacting this bill only would make it easier. Although immigration law provides that no one associated with a totalitarian or communist government is admissible, that provision hardly is used to keep anyone out—and the Chinese know who can pass muster.

This bill is championed by Big Tech. The industry constantly is trying to upgrade its work force to stay competitive and to do it with the least cost.  Accordingly, tech wants the foreign labor now, national security or other concerns be damned.

Lastly, it is unsurprising yet deeply disappointing that one of the last acts of this Democrat-controlled House would be to overwhelm our legal immigration system and, yet again, misplace the focus away from President Joe Biden’s border crisis. It is irresponsible for Congress to be legislating on legal immigration issues while U.S. Customs and Border Protection reports more than 5 million illegal encounters at the border since Biden took office Jan. 20, 2021.

Instead of action, oversight, or solutions, Congress expects to vote on a bill that would compound our long-term immigration problems.

Lawmakers should vote no on the EAGLE Act and instead fix our porous borders and end the crisis that the Biden administration has designed.