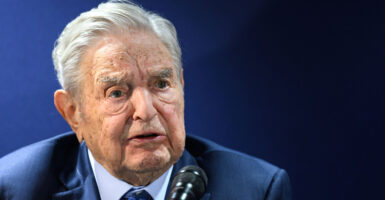 An investment group linked to leftist billionaire George Soros—seen here answering questions after a speech at the World Economic Forum in Davos, Switzerland, on May 24—financed the purchase by a left-wing group of 18 Hispanic-language radio stations. The sale was approved last month by the FCC. (Photo: Fabrice Coffrini/ AFP/Getty Images)

By greenlighting the sale of 18 Spanish-language radio stations to a group linked to billionaire George Soros, the Biden administration is handing millions of unwary listeners over to far-left activists. The reason? Hispanics continued their overall migration toward the Right in November’s midterm elections, an evolution that shatters the Left’s playbook.

The Left, thus, has a two-pronged response to this trend; namely, to limit the choices that Spanish-language listeners have and to smear conservative opinion as misinformation. “[T]here is a massive disinformation problem in Spanish-language media,” tweeted President Joe Biden’s former press secretary, Jen Psaki, who is now an MSNBC analyst, the day after the midterm elections.

Why not just counter conservative arguments with leftist ones, rather than censor or smear your opponents? Because it’s well-nigh impossible. You try defending socialism, the sexualization of children, the racialization of everything in life, or turning back progress in the name of climate change.

So, instead, the Federal Communications Commission, one of those ostensibly independent parts of the permanent bureaucracy in which Biden gets to appoint the leader, decided Nov. 21 to approve TelevisaUnivision’s sale of the 18 stations to Latino Media Network.

LMN obtained debt financing from Lakestar Finance LLC, an investment group associated with Soros Fund Management, an investment management firm founded by George Soros, a multibillionaire who freely spends his vast wealth on far-left causes. Over time, Soros has transferred $32 billion to his Open Society Foundation, which funds nefarious projects across the globe.

For example, Soros is deeply involved in financing such outfits as the National Domestic Workers Alliance, which exists ostensibly to organize domestic U.S. workers, but is in reality a cog in this country’s vast Marxist machinery. The NDWA is open about the fact that it organizes domestic workers because the majority “are immigrants and women of color,” categories targeted by organizers since the New Left in the 1960s.

It was the NWDA that sent one of its top operatives, Alicia Garza, who also co-founded Black Lives Matter, to Ferguson, Missouri, in 2014 following the shooting of Michael Brown so she could organize with other socialist groups and turn BLM from a movement into a network.

The NWDA also has Jess Morales Rocketto as a political director. It was Rocketto who raised the $80 million to set up LMN, which she founded with Democratic Party activist Stephanie Valencia. Rocketto is now the co-executive chairwoman of LMN’s board.

Why is the Soros-funded NDWA getting involved in messaging? Because as it says about itself, “For NDWA, a strategy focused on changing the beliefs and mental models that help people make meaning of the world is a goal in and of itself.”

Rocketto is a longtime Garza associate, serving in numerous far-left organizations with her, not just the NDWA. The two collaborators co-founded Supermajority , which mobilizes voters on behalf of the Marxist Left.

The NWDA, and Rocketto personally, have encouraged Hispanics to show up for BLM demonstrations, which in 2020 ended up in riots on more than 600 occasions. On July 20, 2020, the NWDA participated in the “Strike for Black Lives,” in which unions took part in a mass strike in 25 cities.

Rocketto also encouraged her Latino followers to take part in the 2020 insurrection, the costliest civil disturbance in U.S. history, and to follow BLM’s leadership overall. She did the same in Ferguson in 2014.

All this will come as a shock to the listeners of Radio Mambi, one of the Miami conservative radio stations that the FCC will now allow Rocketto’s LMN to buy, and in time, eviscerate. Mambi’s audience consists mostly of victims of Marxism, many of them having escaped Cuba and Venezuela.

BLM idolizes the communist dictators of these countries, which means that its new affiliate in Miami, LMN, will take special pleasure in rubbing salt in Mambi’s listeners’ wounds, all courtesy of Soros. LMN will also undoubtedly censor listeners’ news in the same manner as Fidel Castro and Nicolas Maduro. Viewpoint diversity leads to educated choices in the voting booth. We can’t have that.

After all, Hispanic voters in Florida catapulted Gov. Ron DeSantis, a Republican, to an unheard-of 20-percentage-point victory this year, with Cuban Americans supporting the governor at a stratospheric 68% rate or higher. This led Psaki, who can discover an acorn when she’s not misinforming about misinformation, to proclaim that “the Latino vote is not the same everywhere! … Socialism does not play there [Florida].”

It sure doesn’t, but it would have been more accurate for Psaki to say that the “Latino vote” doesn’t actually exist. Overall, the Hispanic vote for Republicans was 40-60, something of a high-water mark and a 50% jump from Mitt Romney’s paltry 27% a decade ago. But that explains nothing.

And that is the reason that BLM acolyte Rocketto (with help from Soros) must stomp on Mambi and the other 17 stations she now controls. If you can’t win the debate, lose the opposition.

This article first appeared at The Washington Examiner.