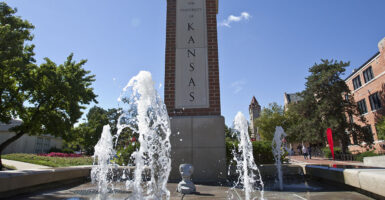 A justice on the Kansas Supreme Court resigned from his teaching position at the University of Kansas School of Law after an administrator tried to convince students to cancel an event featuring a senior lawyer with Alliance Defending Freedom (ADF) and a school diversity committee condemned that Christian legal organization as a purveyor of “hate speech.”

Representatives of the University of Kansas Law School did not respond to multiple requests for comment about whether the school endorses the accusation, which appears to trace back to the discredited Southern Poverty Law Center’s accusation that Alliance Defending Freedom is a “hate group.”

The leftist SPLC places Alliance Defending Freedom—which has won multiple cases at the Supreme Court in recent years—on the same map with Ku Klux Klan organizations. As I note in my book “Making Hate Pay: The Corruption of the Southern Poverty Law Center,” the SPLC has faced many scandals in recent years and even notable left-leaning advocates who support it have defended ADF from this charge.

On Nov. 25, in a letter resigning his teaching position at the law school, Kansas Supreme Court Justice Caleb Stegall wrote to Dean Stephen Mazza that students told him that an associate dean and a professor met with leaders of the school’s Federalist Society chapter and “pressured the students to cancel the event” with ADF’s Jordan Lorence, a senior counsel and director of strategic engagement.

Stegall identified the associate dean as Leah Terranova and the professor as Pam Keller.

“The student leaders were told several times to consider what this would do to their reputation,” Stegall wrote.

The law school allowed the Federalist Society event with Lorence to go ahead, but suggested that it would damage students’ future prospects for a legal career.

After the meeting with student leaders but before the event took place, the entire KU Law community received an email from a panel called the Diversity, Equity, Inclusion and Belonging Committee. That email, accessible here, accused Alliance Defending Freedom of purveying “hate speech.”

“The legal positions of the ADF—particularly as they relate to the rights, freedoms and humanity of the LGBTQ+ community and its individual members—do not align with the values of the law school,” the committee wrote. “ADF has taken legal positions designed to criminalize homosexuality, demonize trans people, and degrade the civil rights of members of the LGBTQ+ community. As such, the interests and activities of ADF are antithetical to the inclusion and belonging we strive to achieve on our campus.”

The committee grudgingly noted that “as a school of law at a public university, we are bound by the tenets of the First Amendment and its protection of freedom of speech and expression, including hate speech.”

Yet the panel concluded by urging “all members of the KU Law School community to remember and reflect upon the values and responsibilities we hold as members and future members of the legal profession, including our obligation to promote justice for all people.”

Stegall, the state Supreme Court justice, noted in his resignation letter that “the email, by implication, accused the student leaders of the KU Law Federalist Society of facilitating hate speech.”

“Worse,” Stegall wrote, “the email made it very clear that the principles of free and open dialogue are only acquiesced to as a legal obligation at KU Law—they are not celebrated, cherished, or valued.”

In the diversity committee’s email, the justice said, “the student members of the KU Law Federalist Society chapter were held up before the entire community as pariahs.”

Stegall also noted that only a few days after the KU event with Lorence, the Kansas Bar Association hosted an Alliance Defending Freedom lawyer at a continuing legal education event for all Kansas lawyers—and a KU law professor appeared on stage with the ADF lawyer.

“Is KU Law prepared to accuse the KBA, [one of its own professors], and the Kansas Supreme Court of facilitating hate speech? Somehow I doubt it,” Stegall wrote.

The justice went on to lament the irony that the diversity committee appears to be “the operational arm of a bigger effort to silence large segments of our society.”

He said he resigned to avoid providing “tacit support” for a trend that “so clearly threatens the basic pillars of our profession.”

ADF’s Lorence told The Daily Signal: “It is incredibly concerning that a prominent law school, which should be training future lawyers to persuade others through logic and legal principles, is instead actively working to suppress free expression on campus.”

It is extremely troubling that the administration is relying on deliberate mischaracterizations from the Southern Poverty Law Center, which is a thoroughly discredited, blatantly partisan activist organization with zero moral authority. Those from across the political spectrum—including Nadine Strossen, former head of the ACLU—have voiced their objections to ADF’s inclusion on the SPLC’s list, which progressive writer Nathan J. Robinson has called “an outright fraud” and “a willful deception.”

Disreputable ideologues shouldn’t be able to make the rules about whose views are allowed on campus and whose aren’t. This is contrary to everything a law school should be teaching. We must restore a culture of free speech and civil discourse at KU and other law schools, or the future of the legal profession will remain in dire straits.

In 2019, the Southern Poverty Law Center fired its co-founder, saw its president step down, and had a former employee reveal that the “hate group” list is a cynical fundraising scam. The scandal followed accusations of racial discrimination and sexual harassment, some of which traced back decades.

A deranged would-be terrorist used the SPLC’s “hate map” to target the conservative Christian group Family Research Council’s Washington, D.C., headquarters in 2012, intending to shoot everyone in the building and smear a Chick-fil-A sandwich in the face of each victim.

A security guard in the lobby prevented the attack, and a jury later convicted the man on terrorism charges. Although the SPLC condemned the assault, it has kept the Family Research Council on its “hate map” ever since.

Jeremy Tedesco, ADF senior counsel and vice president of U.S. advocacy, denied SPLC’s claim that Alliance Defending Freedom “has supported the idea that being LGBTQ should be a crime in the U.S. and abroad and believes that it is OK to put LGBTQ people in prison for engaging in consensual sex.”

Asked in 2019 whether this is true, Tedesco told PJ Media: “No. And neither ADF nor ADF International are litigating any cases or pursuing any legislation that support such efforts.”

”ADF is a Christian organization, and our beliefs are grounded in our religious faith,” Tedesco said. “This includes the belief that all people should be free to live and work according to their beliefs, without fear of government punishment. In fact, our international arm is working in various parts of the world to stop the violent persecution of religious minorities.”

Tedesco also said claims that Alliance Defending Freedom demonizes LGBT individuals are “false” and a misrepresentation of free speech cases such as Masterpiece Cakeshop v. Colorado Civil Rights Commission (2018). He noted that ADF clients such as Jack Phillips and Barronelle Stutzman “serve everyone—including LGBT customers—but cannot create art that promotes all messages or events,” so as Christians they refuse to create art that promotes same-sex weddings or gender transitions.