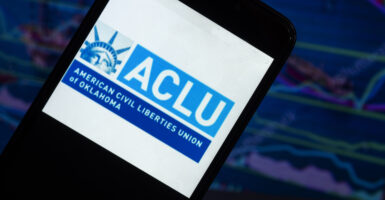 The American Civil Liberties Union is a leftist organization, not one that defends free speech.

That’s what was revealed in an op-ed by David Cole, the ACLU’s legal director, published Monday in The New York Times in reference to the Supreme Court case called 303 Creative LLC v. Elenis.

The ACLU’s op-ed in the Times begins reasonably enough:

Can an artist be compelled to create a website for an event she does not condone? That’s the question the Supreme Court has said it will take up on Monday, when it hears oral arguments in 303 Creative v. Elenis. The answer would seem to be obviously “no.”

The next sentence begins with “but,” a theme of this piece that both distorts the implications of the case and demonstrates how the ACLU’s commitment to free speech becomes tenuous when left-wing social values are at stake.

As the Washington Examiner’s commentary editor, Conn Carroll, wrote, the ACLU op-ed confuses the issue of 303 Creative v. Elenis, writing several times that it effectively is about whether a business can turn away a customer because of race, sexual orientation, or religion.

“The right question is whether someone who chooses to open a business to the public should have the right to turn away gay customers simply because the service she would provide them is ‘expressive’ or ‘artistic,’” the ACLU’s Cole writes, and makes a similar statement two more times.

“Cole’s mistake in all three paragraphs is the same mistake Justice Sonia Sotomayor made in the Masterpiece Cakeshop case,” Carroll wrote, referring to the 2018 Supreme Court case involving Christian baker Jack Phillips, who refused to make a custom cake to celebrate a same-sex wedding.

Cole and Sotomayor are falsely claiming in both cases that the artists being forced to speak are refusing to speak because of the identity of their customers. But that is just false. The customer’s identity has nothing to do with the content of the compelled speech.

Exactly. Despite how the ACLU is trying to frame this case, it isn’t about whether a business can refuse service based on a person’s identity. It’s about whether a public accommodations law may be used to compel a business owner to speak or not speak in a way that violates his or her religious beliefs.

This is about the First Amendment, an issue about which the American Civil Liberties Union used to be more absolutist. In 1978, the ACLU defended the free speech rights of a neo-Nazi group to march through Skokie, a village adjoining Chicago where many Holocaust survivors lived.

That’s ancient history. It appears that the ACLU is fine with restricting the First Amendment when it clashes with the organization’s other views.

“The ACLU has been this nation’s leading defender of free speech for more than a century,” Cole writes in the Times. “We firmly believe that states cannot compel artists or anyone else to express messages with which they disagree.”

But,” he goes on, and the ACLU’s “buts” are doing a lot of work here, “we filed an amicus brief supporting Colorado in 303 Creative, and we defended the same law five years ago on behalf of the gay couple denied service by Masterpiece Cakeshop.”

So now the ACLU sides with the state against individuals to crush First Amendment rights. Quite a turnaround.