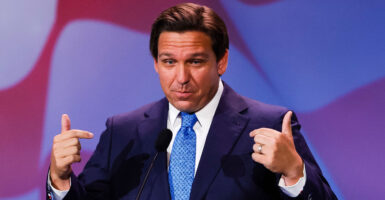 The politics and public policies of Florida Gov. Ron DeSantis—seen here speaking at the Republican Jewish Coalition annual leadership meeting in Las Vegas on Nov. 19—are among the reasons the author left New York for Florida. (Photo: Wade Vandervort/AFP/Getty Images)

Michael Wilkerson is the author of "Why America Matters: The Case for a New Exceptionalism," published in October.

“Why, after three decades of life as a New Yorker, did you move to Florida?”

I’m often asked this question with a mix of wonder, as if I’d just traveled across Mongolia on horseback, tainted by Upper East Side disdain (“Did you retire early?” How was the hurricane?” etc.).

For background, I first came to live in Manhattan in 1992, while the crack epidemic still raged. After Rudy Giuliani became mayor in 1994, quality of life in the city improved dramatically. Conditions continued to improve on sound policies through the Michael Bloomberg era. However, after Bill de Blasio came to power, things began to deteriorate as they often do, first slowly and then suddenly.

New York state’s and New York City’s mutual mismanagement of pandemic response, rising crime and social unrest, collectively signaled the collapse of a wall that had the stabilizing bricks of law and civic order removed from it one by one. In a reflection on the vast differences between Creation and Destruction, what took decades to build was torn down in a matter of months.

Eventually, I like many others decided enough was enough, and exited the place I’d come to call home and thought I’d never leave.

I came to Florida during the peak insanity of lockdowns, mask mania, and vaccine mandates, and the increasing inhospitality of public life elsewhere.

I moved for two reasons: to leave somewhere and to arrive somewhere very different.  Rather than focus on why I left, it’s more constructive to describe why, of all the places in the world I could have resettled, I chose Florida. Here are five reasons why I believe I made the right choice.

Indeed, Florida has one of the most liberal and welcoming immigration policies in the nation. I myself migrated here as a political refugee in exile, and shockingly, no one stopped me at the border, even though I twitched like a stressed New Yorker, had never experienced a hurricane, and lacked the Floridian’s permanent tan and sunny optimism.

After I snuck across the border around 3 a.m., hopped up on coffee and Twizzlers from a rest stop in Georgia, I read a sign with a picture of an alligator holding an orange that said something like “Welcome,” which I assumed meant they were trying to sell me something. It was truly a “Fear and Loathing” moment, but more sober.

As stressful as that was, I quickly learned I wasn’t alone. Today, Florida is experiencing a massive immigration wave, perhaps even a great replacement.  Florida allows immigrants from Blue, Purple, and Red states and cities, including refugees from post-apocalyptic disaster sites and zombie war zones such as San Francisco, New York City, Baltimore, Philadelphia, Detroit, and Portland, Ore. Immigrants are asked a surprisingly few number of questions about their ideological credentials or ancestral guilt. In fact, they’re kind of just left alone to resume life.

While the majority of recent immigrants have been domestic (i.e., from other states), Florida has welcomed a substantial number of international migrants from all over the world. The difference is that, unlike the Biden administration, Florida believes that immigration must be constrained by law and effective borders, and conducted with the state’s strategic interests and economic needs in mind.

Florida welcomes these new arrivals to integrate and assimilate, knowing they are going to propel the state’s economy and society forward.

2) Florida Has Sanctuary Cities of Sorts

Florida’s several large, vibrant, and growing cities, including Orlando, Jacksonville, greater Miami-Dade and Palm Beach counties, along with Tampa, to name a few, have become exceptional sanctuaries for the refugees described above. They find these cities have booming economies, modern civil infrastructure and technology hubs, and local governments that want to see entrepreneurs and businesses of all types and sizes succeed.

Florida’s economy is among the largest and fastest growing in the nation, yet neither the state nor the municipalities seek to bleed out its revenue base through excessive taxes and other rent-seeking behavior (for example, Florida has no income tax). Many cities have incentives for businesses that encourage investment and local development.

It is true that upon arrival to Florida’s sanctuary cities, these refugees often feel shell-shocked from their previous experiences, and somewhat uncomfortable with their recently gained freedoms. For example, they are unprepared for the liberty of not having to wear a mask when riding on public transport, in an Uber, or alone in a car or on a bike.

They keep trying to present their vaccine cards when applying for jobs or at Publix to be allowed access to food. They are confused when they are free buy a toothbrush from CVS without having a security guard unlock it from the Smash-N-Grab prevention case. Indeed, there are no smash and grabs, a derivative of Florida’s Stand Your Ground and Castle Doctrine-type gun laws.

There are also no heroin addicts shooting up or meth kids vomiting on the street, no one trying to accost one’s children on the subway, no one waiting to shove them off the Brightline (Florida’s speedy train connecting the cities) platform onto the train track below. In the extremely rare case that someone with evil intent does try to kill them, they’re not only allowed, but encouraged, to shoot back.

3) Florida Is Still in America

Floridians proudly consider themselves Americans, and seem to have no sense of guilt or shame of it, no desire to bury or distort their own history.  Not only do they consider patriotism—love of one’s country—a good thing, they’re not afraid to show it. They celebrate national holidays for the reasons they were instituted, without having to invent some other narrative that reinvents the past.

The American flag is flown with dignity, not irony. Floridians respect and honor their veterans, and value their constitutional freedoms. Indeed, it is Florida’s immigrants from Cuba, Venezuela, and the former Soviet Union who are most appreciative of America’s foundational values and rights, and the most willing to defend them from communist, neo-socialist or pseudo-progressive ideologies. They speak up and take action. They vote and they protest peacefully.

These survivors have seen firsthand how these utopias end up, and will do whatever they can to ensure that they aren’t allowed to destroy their adoptive homeland. Floridians are willing to defend their state and their nation from those who would seek to tear down and destroy them.

The governor of the state of Florida speaks in a way we citizens understand. Gov. Ron DeSantis uses subject, verb, and object, and most importantly, he links cause to effect. He seems to think that words have consequences, which I find refreshing. He pops political propaganda bubbles; he rejects the rejection of language and meaning. He holds people and platforms accountable for what they say and do, whether they be a big company like Disney, a radical bill in the legislature, or the reality-distortion field that is Big Tech and mainstream media.

Because he’s competent and speaks truth, he’s attracted great and talented people around him and to the state in general. This is producing a virtuous circle of growth and innovation.

Importantly, Florida’s policies are reasonable, rational, pro-business and pro-individual. They are guided by pragmatism, not ideology. In facing the pandemic, Florida was amongst the first states to reject lockdowns, shuttering of businesses, closing of schools, mask tyranny, vaccine mandates, and to approve use of alternative health care therapies rejected and prohibited elsewhere. These actions saved millions of lives and livelihoods.

Florida rejects woke policies and the anti-parent (and anti-biology) gender and sexual indoctrination of children.

Florida is one of the few states left in the country that knows what statehood means. Florida exercises all the sovereign rights endowed to it by constitutional, legislative, and precedential power. Florida is not a subordinate district of a central power to which it must pay subservient obeisance.

Someone here has clearly read and applied the Constitution of the United States, which articulates that the states have all powers that the Constitution doesn’t explicitly grant to the federal government. As scandalous as this seems to those in Washington, D.C., there seems to be a constitutional basis for Florida’s recalcitrance.

As a result, Florida has resisted some of the more overreaching incursions of federal power. Florida is aggressively pursuing legal and regulatory remedies against the ultra vires actions of the Biden administration and the three-letter agencies politically captured by the Democratic Party and the executive branch. This is a long battle that must be won, not just for the sake of Florida, but for every state in the nation.

There are many more than these five reasons why I came to Florida. You’re welcome to join me here. But if these basic truths haven’t convinced you, probably nothing will.

This article was originally published by RealClearFlorida and made available via RealClearWire.