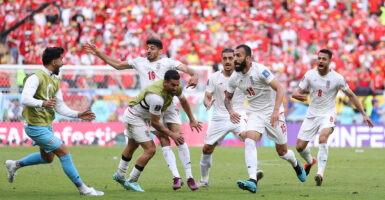 After losing Tuesday to the U.S. team at the World Cup, Iran’s soccer team faces punishment at home from a harsh regime from which they sought to distance themselves. Pictured: The Iranian team celebrates Friday after scoring a first goal against Wales at Ahmad Bin Ali Stadium in Doha, Qatar. (Photo: Richard Heathcote/Getty Images)

All soccer teams worry about what happens during a match, but Iran’s World Cup team is much more concerned about what happens afterward. Iran’s ruthless rulers reportedly threatened the Iranian players with severe punishment if they criticized the Islamist regime’s ongoing crackdown on political protests.

After Iran’s team lost Tuesday to the U.S. team, Iran’s athletes will return home, where they likely face punishment from a harsh regime from which they sought to distance themselves.

CNN reported that after Iranian players refused to sing Iran’s national anthem Nov. 21 in their opening World Cup match against England, the players were summoned to a meeting with officers of the Revolutionary Guard, the regime’s brutal paramilitary enforcers. The officers warned the players that their families would face “violence and torture” if they didn’t sing the Iranian national anthem or if they joined protests against Iran’s dictatorship, CNN reported.

Dozens of members of the Revolutionary Guard were deployed to Qatar, site of the World Cup tournament, where they monitored the Iranian athletes, who weren’t allowed to meet with foreigners unless supervised by regime loyalists.

Last Thursday, Iranian authorities arrested a former national team player, Voria Ghafouri, in what was widely seen as a warning to current members of Iran’s World Cup squad to keep their mouths shut.

Intimidated by the threats, Iran’s players mumbled through their national anthem at their Friday match against Wales, exhibiting the false enthusiasm of hostages in a proof-of-life video.

Indeed, they were hostages. Iran’s totalitarian Islamist regime in effect took the players and their families as hostages to minimize damaging media coverage of the regime’s systematic repression of Iranians.

Iran has been engulfed in a nationwide wave of protests since the Sept. 16 death of Mahsa Amini, a 22-year-old woman who was beaten to death by Iran’s morality police after being arrested on charges of wearing clothing that violated the regime’s strict dress code.

Iran’s clerical dictatorship has cracked down violently on peaceful protesters, killing at least 451 and arresting over 18,000, according to human rights activists.

For Iran’s beleaguered regime, the World Cup was a welcome distraction from the spiraling political crisis at home. President Ebrahim Raisi, whose ultra-hardline policies helped to trigger Iran’s populist revolt, sought to soften his image by appearing with the soccer team before it departed for the tournament in Qatar.

Raisi posed for pictures with the team holding a jersey with his name printed on the back. At least one player bowed. The regime hoped that Iran’s national team would become a unifying force that would help reduce political tensions and anti-government protests.

But Tehran’s efforts to exploit the team as a political tool failed due to what one expert on Iran called “a mishmash of heavy-handed tactics, allegations of manipulation, and embarrassing ideological contradictions.”

Many protesters and their supporters immediately criticized the players for appearing with Raisi and declared that they wouldn’t root for a team of regime shills.

Bruised by such criticism, Iran’s players made clear that they sympathized with the protesters, not the regime, by refraining from singing the national anthem in Iran’s first match at the World Cup.

In addition to threatening the players with dire consequences, Iranian officials monitored Iranian fans at the tournament.  Hundreds of government officials and regime supporters traveled to the World Cup at public expense to cheer for Iran’s team. Pro-regime mobs confronted and intimidated Iranian fans who wore protest symbols outside the stadiums.

Female Iranian fans complained that regime spies videotaped them in Qatar, where these fans ignored the regime’s ban against women attending soccer matches, which is strictly enforced in Iran.

The cynical autocrats misgoverning Iran apparently have concluded that offense is the best defense.

Iran’s soccer federation and state-controlled media demanded Sunday that the American team be expelled from the World Cup tournament after the United States Soccer Federation altered Iran’s flag on the federation’s social media platforms to show support for protesters in Iran.

The federation temporarily displayed Iran’s national flag on its social media accounts without the emblem of the Islamic Republic, to show “support for the women in Iran fighting for basic human rights.”

Iran’s flag already had become a point of contention at the World Cup. Pro-government supporters waved it while shouting down anti-government protesters. Some Iranian fans waved Iran’s pre-revolution lion and sun flag, an emblem of the nation’s former ruler, the late Shah Mohammad Reza Pahlavi.

After losing to the U.S. team Tuesday by a score of 1-0, the members of Iran’s soccer team face an uncertain future upon their return home. If they are deemed to be threats to the regime, they will pay a heavy price under Iran’s harsh and politicized judicial system.

In 2020, champion Iranian wrestler Navid Afkari was executed after being “unjustly targeted” for the alleged murder of a security guard after participating in anti-government protests in 2018.  Afkari claimed that he had been tortured until he was forced to admit committing the crime.

For Iran’s totalitarian regime, sports are a vehicle for propaganda. The regime now will put immense pressure on members of the World Cup team to distance themselves from the ongoing protests and affirm their support for the reviled government.

The sad reality is that Iran’s soccer team, as well as most of the nation’s 86 million people, are hostages to a morally bankrupt, predatory regime.