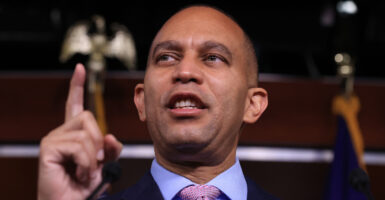 House Democrats have chosen Rep. Hakeem Jeffries to follow Nancy Pelosi in leading Democrats in the next Congress as minority leader.

Jeffries, a 52-year-old New York Democrat, is a member of the House Judiciary Committee and the House Budget Committee as well as chairman of the House Democratic Caucus. He is avidly anti-former President Donald Trump, has painted Republicans as “extreme MAGA Republicans” who wish to “criminalize abortion care, end Social Security, and undermine Democracy,” and has repeatedly questioned the results of the 2016 election.

“Humbled to be elected incoming House Democratic Leader,” he said Wednesday in a Twitter post. “Ready to get to work.”

Leftist groups and Democrats celebrated Jeffries’ promotion. MeidasTouch, a progressive political action committee, predicted that he would be the “GOP’s worst nightmare.”

Conservative groups pointed out that Jeffries has repeatedly questioned the results of the 2016 election, claiming it was “ILLEGITIMATE.”

“America deserves to know whether we have a FAKE President in the Oval Office,” he tweeted in 2018

Longtime California Democrat Pelosi had announced Nov. 17 that she would not seek reelection to Democratic leadership in the next Congress, saying: “For me, the hour has come for a new generation to lead the Democratic caucus that I so deeply respect.”

Pelosi was the first woman to control the House of Representatives. Under her leadership, Democrats have pushed some of the most radical legislation the United States has ever seen, including the Women’s Health Protection Act and the Respect for Marriage Act.

The headline of this article has been corrected to reflect Jeffries’ new role.