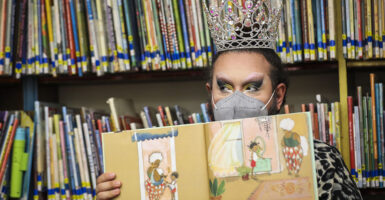 A major scandal at luxury fashion brand Balenciaga has exposed the sexualization of children in our culture and highlighted a problem no one wants to address—the fact that our cultural “elites” seem to think this is OK.

The design company—well known for its collaboration with entrepreneur Kim Kardashian and for producing some of the ugliest, overpriced items on the market (think stiletto Crocs)—plunged into controversy following publication of photos in two Balenciaga advertising campaigns.

As public backlash built against the blatant impropriety and sinister nature of these campaigns, Paris-based Balenciaga removed the images from their platforms and issued an apology. The company claimed that it “strongly condemns child abuse; it was never our intent to include it in our narrative,” adding that the campaigns reflect “a series of grievous errors for which Balenciaga takes responsibility.”

In light of the controversy, Kardashian said she is “reevaluating” her relationship with the brand.

The whole sordid mess raises many questions that deserve to be answered. The most obvious: How on Earth were these campaigns ever released to begin with?

Balenciaga casts much of the blame on an outside production company (the fashion brand filed a lawsuit against it seeking $25 million in damages), while claiming to take accountability for its “lack of oversight.”

This response rings hollow. Regardless of how many outside contractors contributed, most people understand that for such a costly project to reach the public, it first must go through rounds of approvals. There are planning meetings and design meetings and production meetings.

Apparently, at no point did anyone involved say, “Stop.” It didn’t occur to any designer or photographer or executive that people might object to the sexualization of children.

This speaks to the heart of the problem. The producers of these campaigns either a) didn’t realize exploiting children in this way is wrong or b) they knew it is wrong, but wanted their audience to accept it. Either option is abhorrent.

Whatever the case, in these instances, Balenciaga was participating in a larger push that we have witnessed from far-Left cultural institutions: the attempt to mainstream the sexualization and exploitation of children.

We have seen this played out many times in the past few years. Parents increasingly have grown outraged and spoken out about the problem of graphic sexual content in public schools—only to be shut down and silenced by leftist, activist school boards.

Drag queen story times and children’s events have become pervasive across the country. Celebrated by the Left as progressive and empowering, these events expose kids to sexual content.

In July, Florida’s Department of Business and Professional Regulation filed a complaint against a Miami bar that hosted “sexually explicit” drag shows for kids. A video from one event showed a drag queen, dressed only in a thong stuffed with dollar bills, strutting around a bar with a little girl.

In Tennessee, conservative lawmakers are trying to ban drag performances that target children but already are facing pushback from LGBT activists.

It’s encouraging that, despite the cultural pressure from the media and academia to accept such immoral behavior, Americans are rooted enough in reality to recognize evil when they see it. But it isn’t likely that cultural elites will learn anything at all from the Balenciaga scandal.

Already, major media outlets, including The New York Times and Rolling Stone, seem to suggest that “far-Right influencers” and Fox News are fueling the outrage against Balenciaga.

Alyssa Farah Griffin, one of the hosts of ABC’s “The View,” went so far as to suggest that the real issue is that, by publishing these photos, Balenciaga made a “misstep” that “gives credence to those kind of insane takes” from conservatives opposed to transgender ideology.

To stop the slow progression of this insidious effort that seeks to normalize exploitation of children, Americans must remain vigilant. We must call out this evil for what it is. We must check its supporters at every turn. We must support policies that protect kids.

If we don’t, the Left will push the line for what is acceptable further and further into dangerous territory. And our kids will be the ones who suffer for it.