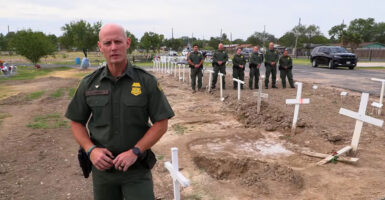 "Don't risk it ... it can cost you your life": Chief Agent Jason Owens of the Border Patrol stands in front of rows of unmarked graves as he issues a dramatic warning to anyone who hopes to come to America unlawfully. (Photo: U.S. Border Patrol)

Rows of unmarked graves are visible behind Chief Border Patrol Agent Jason Owens as he pleads with those seeking to enter America not to cross the southern border illegally.

“Don’t risk it,” Owens says in a short video with Spanish subtitles posted on the Facebook page of the Border Patrol’s Del Rio sector over the weekend. “This journey is deadly, it’s dangerous, it can cost you your life.”

Owens oversees the Del Rio sector, a stretch of 53,063 square miles in Texas, including 47 counties and 245 miles along the Rio Grande. It is one of nine such Border Patrol sectors adjacent to the U.S.-Mexico border.

The men, women, and children who cross illegally into the Del Rio sector often do so by swimming or wading across the Rio Grande.

In fiscal year 2022, which ended Sept. 30, the men and women of the Border Patrol’s Del Rio sector rescued 3,000 individuals who put their lives at risk to enter America unlawfully, Owens says in the video.

Tragically, at least 260 were “people we couldn’t save,” the sector chief says.

“To anybody that’s considering making this dangerous journey, it’s not just us that this impacts,” Owens says in the video, which is just over 2 minutes long. “It’s your families and it’s your loved ones, if we don’t get to you in time.”

“What you see behind me right now are just a few of the grave markers of the individuals we weren’t able to save, and more than that, we weren’t able to identify,” he says, adding that some of the unidentifiable lives lost in his sector include baby girls and boys.

Owens describes fiscal 2022 as a “crazy year,” with more than 470,000 illegal immigrants apprehended by the Border Patrol in the Del Rio sector alone, and 160,000 illegal aliens or “gotaways” who succeeded in evading agents.

The Border Patrol encountered a total of 2,005,026 illegal aliens between Oct. 1, 2021, and Sept. 30, 2022, the first full fiscal year of Joe Biden’s presidency, a new record and nearly half a million more than the previous fiscal year.

So far in fiscal 2023, U.S. Customs and Border Protection reports 42,376 encounters with illegal aliens in the Del Rio sector. Within the first three weeks, Border Patrol agents in the Del Rio sector already had “encountered subjects from over 35 different countries,” according to the sector’s Facebook page.

Customs and Border Protection only publicly report the number of encounters with illegal immigrants from Mexico, Guatemala, El Salvador, and Honduras. Those from all other nations are grouped as “other.”

Ries argues that the next Congress should take several actions to secure America’s southern border, including budgeting funds to complete the border wall, reinstating the Trump administration’s “Remain in Mexico” policy, and working to “eliminate fraudulent asylum claims.”

“The Biden border crisis has gone on long enough,” Ries writes. “It has enriched the drug cartels, while destroying countless American lives in communities across our country. Illegal aliens themselves are dying in record numbers making the journey. It’s time for Congress to do its job and secure our border.”

The first sentence of this report has been modified for greater clarity.