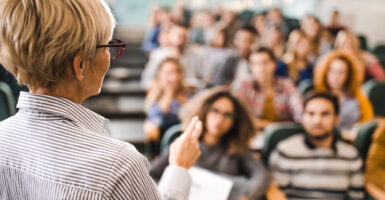 A conservative student reveals how he avoided becoming demoralized in college and turned his experience into an opportunity to prepare himself for the critical ideological battlefield ahead. Pictured: Photo illustration of a professor talking to large class of students. (Photo: skynesher/Getty Images)

Alexander Gage is a member of the Young Leaders Program at The Heritage Foundation.

Decades ago, KGB spy Yuri Bezmenov defected to America and exposed a four-step plan the Soviets engineered to bring down the United States: demoralization, destabilization, crisis, and normalization. Demoralization was the first and most critical step, and it involved infiltrating the institutions upon which our society was built.

Although the Soviet Union is long gone, demoralization is still occurring in the United States, but it’s coming from within, especially from our academic institutions. I know this firsthand because I almost became another demoralized, nihilistic American youth until I learned to turn my left-leaning college experience to my benefit.

I attended the University of Colorado Boulder—in a place so far ideologically left that Coloradans jokingly refer to the town as “The People’s Republic of Boulder.” On the surface, it looked like a typical college campus with sororities, fraternities, and students busily rushing around campus trying to get to their destinations. Students had that adventurous attitude that comes with being away from home for the first time.

However, I was able to quickly pick up on the subliminal messaging in my introductory classes intended to push students toward the left. And the messaging became increasingly more blatant and extreme as my undergraduate career progressed.

For example, my Sociology 101 professor delivered his lectures as if he were matter-of-factly lecturing on various theories, thinkers, and ideas of the field, but he skillfully and ever so cunningly was steering 400 students to think as Marx did.

I specifically remember how he got almost the entire class to agree with his proposition that employees and employers are inherently in conflict with each other because while one group is interested in trying to increase its compensation, the other is actively attempting to lower it. Of course, there was absolutely no mention of thinkers such as Thomas Sowell who thoroughly debunked that Marxist viewpoint.

What was most alarming to me as a 19-year-old college student was just how unthinkingly my peers accepted the professor’s argumentation without much, if any, challenge.

By the time I became a senior in college, I witnessed a professor declare to the class his allegiance to Foucauldian ideology (i.e., an oppressor versus oppressed worldview expressed by power dynamics) by stating, “I’m a Michel Foucault fanboy.” When this professor suggested that being white automatically made a person a racist, my classmates simply nodded their heads, accepting such nonsensical statements as truth.

What solidified all this indoctrination in such young impressionable minds was when my fellow students were generously rewarded with high scores for their repetition and slow acceptance of the leftist worldview. This is how the process of demoralizing thousands of young people at just one of the many “places of higher learning” throughout our nation takes place.

With the nonstop bombardment of woke messaging coming at college students, how can they possibly hope to maintain the will to keep pursuing their degrees, let alone keep their sanity?

The answer lies within a human being’s power of interpretation. According to the ancient stoics, the only things in the world that we have total control over are our own actions, our reactions to outside stimuli, and the way we interpret our experiences. This wisdom is directly applicable to—and necessary for—the survival and thriving of an open-minded college student.

Although I had a choice to view my college experience as a dreadful slog through the thick mire of extreme leftist ideology with its divisive messaging, I decided to treat this experience as an opportunity to learn as much as I could about what makes people so possessed with such a negative worldview. In other words, I treated my college years as an observational research project.

I attended each class with this mindset, and, in a very short time, I was able to make my classes significantly more interesting—all because of how I chose to think about them.

This is what my advice is to students sitting in a classroom right now, trying to keep their eyes open because they’re so bored of being on the receiving end of incessant propaganda: Remain critically engaged without becoming sentimental about well-crafted messaging directed to arouse feelings of guilt or inadequacy. Also, view your experience as an opportunity to get a behind-the-scenes look at how the process of demoralization works in practice.

For those who reject this extreme ideology because of its destructive nature that divides people into “us versus them” categories, treat this as an opportunity to learn about how and what your ideological opponents think and what their plans for the future are.