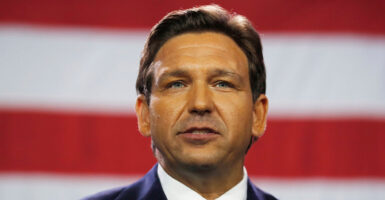 “Apple has mostly stopped advertising on Twitter. Do they hate free speech in America?” Musk, the billionaire owner of Twitter and Tesla, tweeted Monday. “Apple has also threatened to withhold Twitter from its App Store, but won’t tell us why. Who else has Apple censored?”

DeSantis said at a news conference that Apple may need to be investigated by Congress.

“When you also hear reports that Apple is threatening to remove Twitter from the app store because Elon Musk is actually opening it up for free speech and is restoring a lot of accounts that were unfairly and illegitimately suspended for putting out accurate information about COVID, that’s like one of the main things being reinstated,” DeSantis said.

“So many of things these experts were wrong about, and you had people on Twitter that were calling that out, and the old regime at Twitter, their response was to just try to suffocate the dissent, and Elon Musk knows that’s not a winning formula so he is providing free speech.”

DeSantis argued that if Apple went through with the alleged threat, it would be a monopolistic abuse of power.

“So if Apple responds to that by nuking them from the App Store, I think that would be a huge, huge mistake, and it would be a really raw exercise of monopolistic power that I think would merit a response from the United States Congress,” DeSantis said. “So don’t be a vassal of the [Chinese Communist Party] on one hand, and then use your power in the United States on the other to try to suffocate Americans and try to suppress their right to express themselves.”

Musk fired off a string of tweets about Apple Monday.

“Did you know Apple puts a secret 30% tax on everything you buy through their App Store?” he said.

Musk also posted a poll asking whether “Apple should publish all censorship actions it has taken that affect its customers.” More than 2 million users responded with about 85% choosing “yes.”

Apple did not respond to a request for comment.

Twitter has become a daily source of breaking news with Musk’s controversial comments and a string of policy changes from the social media giant. Musk said in a recent tweet that Twitter has hit all-time high usage since he took over, though many advertisers have begun distancing themselves from the platform.

Musk hasn’t released data to back up the record user claim, but the site has been more tumultuous and a source of constant media coverage since he took over leadership of the company.

One of those controversial decisions was Musk reinstating former President Donald Trump to the site. Trump was removed after the Jan. 6, 2021, riots.

Musk tweeted a poll to decide whether Trump should be reinstated, with 51.8% saying yes to Musk’s question after 15,085,458 votes.

Twitter has also reinstated other users like the satire site The Babylon Bee, Kanye West, and liberal comedian Kathy Griffin.

A common criticism of Twitter has been inappropriate content toward certain groups as well as outright false information.

“New Twitter policy is freedom of speech, but not freedom of reach,” Musk tweeted. “Negative/hate tweets will be max deboosted & demonetized, so no ads or other revenue to Twitter. You won’t find the tweet unless you specifically seek it out, which is no different from rest of internet.”

For his part, Musk claims the fight over Twitter is much bigger than just his company.

“This is a battle for the future of civilization,” he said. “If free speech is lost even in America, tyranny is all that lies ahead.”