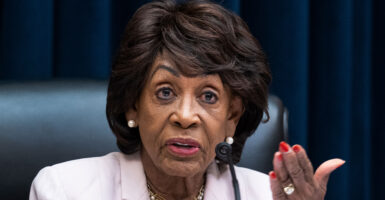 Many in the liberal media hailed the election defeats of a number of conservative Republicans they dubbed "election deniers." They were oddly silent, however, about leftist Democrats, among them longtime Rep. Maxine Waters, D-Calif.—seen here Sept. 21 —who have a long history of denying election results they don't like. (Photo: Tom Williams/ CQ-Roll Call/Getty Images)

“Election deniers overwhelmingly failed in 2022,” The Independent declared. “The most prominent election-deniers lost their races,” according to Business Insider. The Los Angeles Times crowed: “Liars lose and deniers are denied.”

True, one of America’s biggest election deniers received the drubbing that President Joe Biden prescribed for those who practice “semi-fascism” and “refuse to accept the results of a free election.”

But other election deniers romped. Indeed, some won landslides rivaling those in North Korea.

“I say to my colleagues, please do not talk about this as a ‘conspiracy theory,’” Pelosi added. “It is not about that. It is not about conspiracy; it is about the Constitution of the United States.”

During 2005’s certification ceremony, Waters racialized 2004’s vote in the Buckeye State. “Ohio’s partisan Secretary of State, Mr. Kenneth Blackwell—I am ashamed to say an African American man—has failed to follow even Ohio’s election procedures,” she said. “Our ancestors who died for the right to vote certainly must be turning over in their graves.”

Notwithstanding Waters’ race-drenched election denial, she beat Republican Omar Navarro this month 73.9% to 26.1%.

Lee also opposed Bush’s Ohio’s electors. “The democratic process was thwarted,” Lee complained on Jan. 6, 2005. She also decried what she called “intimidation and misinformation in violation of the Voting Rights Act” and “widespread efforts to disenfranchise and suppress Ohio voters.”

This should surprise no one. The party that invented election denial enjoys herd immunity against its lethality at the ballot box.