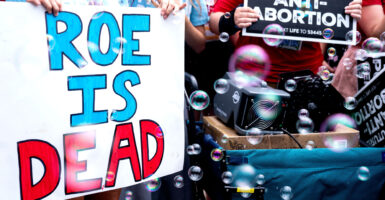 By any measure, Democrats exceeded expectations this midterm. Though listening to the triumphalism today, you’d think Joe Biden was Hannibal at Cannae. A fractured Republican Party has won the House, which means the agenda portion of Biden’s first term is effectively over (save the executive abuse).

As expected, though, the lazy Dobbs-sunk-the-GOP narrative quickly solidified on the Left. “It turns out women enjoy having human rights, and we vote,” Hillary Clinton tweeted. Dem cheerleader Joe Scarborough called it a “massive backlash.” “It will take a while to sort out exactly why Republicans did so much worse than expected,” writes Michelle Goldberg in The New York Times. “But there seems little question that abortion was a big part of the story.”

Listen, if anyone had told conservatives 30 or 20 or even a year ago that the political price for overturning Roe v. Wade would mean taking back only one chamber of Congress in the subsequent midterm, they would never have believed you. So, even if the Left’s tenuous claim that Dobbs saved them in 2022 is to be believed, the price for ridding the nation of the legal and moral abomination of Roe would be well worth it.

But it is a tenuous contention.

It’s humorous that Goldberg begins her piece lamenting how she was hoodwinked into believing in a red wave by right-wing preelection wishcasting. A Politico/Morning Consult poll, she notes, had warned us “that 48 percent of respondents intended to vote for Democrats for Congress and only 43 percent for Republicans.” But the GOP ended up winning the (irrelevant) popular vote this week. Politico/Morning Consult was wrong.

It doesn’t seem like an army of enraged women and young people flooded the polls to exact revenge on the court. If CNN’s exit polls are to be believed, Democrats lost support among women in 2022 compared to the last midterm in 2018. The Associated Press/Fox News exit poll found that 52% of voters were women in 2018, and 52% of all voters in 2022 were women. It is a myth that young people came out in droves. Democrats lost support among younger voters, as well.

Beyond that, Goldberg’s column offers not a single piece of tangible, statistical evidence to back up the theory that Dobbs played a “big,” or even a minor, part in the GOP’s 2022 underperformance.

It’s true that pro-lifers lost abortion referendums, including, incomprehensibly, one in Montana that would have compelled medical care for “infants born alive.” It’s also true that numerous Republican candidates are either unable or frightened to articulate coherent pro-life views. These are problems for Republicans.

On the other hand, Ron DeSantis, Greg Abbott, and Brian Kemp (in a state where the Senate race is in a runoff) all signed heartbeat bills and easily won reelection. John Fetterman might have beaten a dubious carpetbagging conservative in Dr. Mehmet Oz, but pro-life Republicans J.D. Vance and Mike Lee had no problem.

Notice that every Republican loss is chalked up to abortion by the media, the reverse is not. In Iowa, Cindy Axne, an incumbent who made abortion the issue of her candidacy—pledging to pass a national bill legalizing abortion from conception to birth—was beaten by a strongly pro-life Zach Nunn. In Virginia, incumbent Elaine Luria, who ran endless commercials on the abortion issue, fell to pro-life nurse practitioner Jen Kiggans.

None of this is to contend that there aren’t people moved on the abortion issue. It mattered in 2020 and 2018, as well. Unmarried women might now be Democrats’ most reliable demographic, but they were already headed in that direction. Nor is it to say Republicans are winning the issue nationally.

Conversely, we have no idea what the 2022 midterm environment would have looked like had the Supreme Court let Roe stand. It may well have depressed social conservative turnout. Elections are complicated and regionally unique. But there is little evidence that Dobbs produced a political earthquake or even that it changed very much at all.