EXCLUSIVE: Jill Biden Got a Raise. Here’s What She’s Earning for Teaching at a Community College. 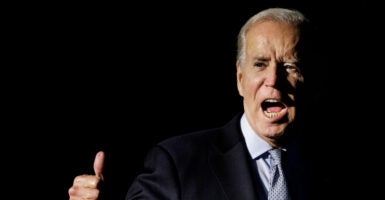 President Joe Biden gives a thumbs up as he shouts to the press while walking to Marine One on the South Lawn of the White House on Nov. 7 in Washington, D.C. (Photo: Samuel Corum/Getty Images)

First lady Jill Biden got a raise at her faculty job at Northern Virginia Community College, where she teaches English.

The community college confirmed to The Daily Signal that the first lady’s salary is $90,299. That’s up from the $85,999 a year for her previously reported contract stretching from August 2021 to May 2022.

While not particularly high to some, the pay appears to be above industry standards for Jill Biden’s peers.

The real median household income in America is $70,784, according to the Census Bureau.

News of the raise for President Joe Biden’s wife comes as the incoming Republican majority in the House of Representatives announced plans to investigate potential influence peddling by the Biden family.

The pay hike reflects the Virginia Community College System’s salary schedule for the 2022-2023 school year for Northern Virginia, according to the community college.

The state’s community college system pay scales are examined and adjusted each July by the VCCS State Board after a new state budget takes effect.

The first lady has a teaching schedule of 12 credit hours for each semester, a spokesperson for Northern Virginia Community College told The Daily Signal.

Jill Biden did not want the community college to publicize her employment, according to reporting from CBS News and The New York Times. Because of this, she is listed as “J. Tracy,” the Times reported. CBS reported the first lady also was listed as simply “Jill T. Biden.”

The White House did not respond to The Daily Signal’s request for comment by publication time. The First lady’s spokesperson Vanessa Valdivia initially said in an email Wednesday she would respond to questions for the story later in the afternoon but did not have a statement by late Wednesday.

The community college spokesperson told The Daily Signal that the first lady teaches 12 credit hours. The NVCC course catalog lists two courses, English 111, College Composition, using the keyword “J. Tracy.” One is at the Alexandria campus, the other is a Zoom course. No courses are listed under the name Biden.

According to the website Open Payrolls, in the 2020-2021 year, Biden earned 6.3% higher than the average pay for her co-workers as professors at the community college, and made 22.1% more than the national average for government employees.

The Northern Virginia area is among the highest in the U.S. for the cost of living. The website also notes that Jill Biden earns 12.7% more than the average university or college professor.

According to Indeed, the average pay for NVCC faculty is $67,143 per year. The higher-end salary is $87,171. However, Glassdoor reported media salaries for the community college at $103,775.

The Constitution’s emoluments clause prohibits a president from profiting from the office. But that prohibition doesn’t extend to family members.

After a review by the White House and in consultation with the community college, they determined she would be paid through the NOVA Foundation, a 501(c)(3) that while associated with NVCC, does not receive any direct government funding.

“I am an English teacher at NOVA—not First Lady,” the first lady wrote to NVCC colleagues after her husband’s inauguration as president Jan. 20, 2021, CBS reported. “I am trying to keep my roles separate as I did as Second Lady. I appreciate your enthusiasm, but I want students to see me as their English teacher. I am not mentioning it in my classes AT ALL. Thanks for honoring my teacher identity. Jill.”

“If Jill Biden was making more than similarly situated members of faculty, it’s part of a pattern that, it seems, higher education has been very good to the Bidens,” Peter Flaherty, president of the National Legal and Policy Center, told The Daily Signal.

The House Oversight and Reform Committee should consider looking into aspects of this along with the bigger picture of the Biden family’s earnings, Flaherty added.

“The House committee should explore all the connections of higher education and the Biden family to see if there has been preferential treatment,” Flaherty said.

Under the 2021 American Rescue Plan, a stimulus bill that Biden signed into law, the U.S. Department of Education awarded $70 million to Northern Virginia Community College, and primarily is used for student financial aid, according to the community college’s website.

In the prior year, President Donald Trump signed the Coronavirus Aid, Relief, and Economic Security Act, also known as the CARES Act. Under it, NVCC got $10 million toward emergency student financial aid and another $10 million for institutional funding.

Trump later signed the Coronavirus Response and Relief Supplemental Appropriations Act, which awarded $44.1 million to NVCC, of which $11 million was used for student financial aid.

This report was modified within three hours of publication to include recent federal funding of Northern Virginia Community College and a reference to median household income.