No, It’s Not the Economy, Stupid GOP. For Urban Voters, It’s Schools and Parental Rights. 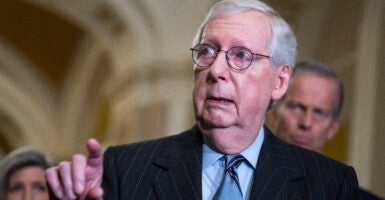 Many conservatives were disappointed by the 2022 midterm election results, both nationally and here in my home state of Rhode Island. It’s important to look in the rearview mirror a bit longer to understand what happened.

Now, before the next campaigns begin and new legislation is crafted, conservatives must reevaluate some of the old-school conventional wisdom campaign tenets that often compel good candidates to make bad decisions that lead to their electoral demise, albeit unintentionally and unknowingly.

In state after state, it’s become obvious that conservatives must break the liberal stranglehold on the urban vote in major metropolitan areas. It will continue to become increasingly difficult for conservative candidates seeking statewide or federal office to win when 80% to 95% of the urban-core vote in their states’ biggest city centers will reliably go to their opponent.

Even with the overwhelming dissatisfaction with our nation’s current trajectory, economically and otherwise, it wasn’t enough to overcome this urban disadvantage.

To win across the board, along with a get-out-the-early-vote strategy, the Republican Party must stop being afraid of engaging in highly sensitive social issues and stop relying only on the now-obsolete notion that economic issues are what mostly matter to this cohort of voters.

As part of an overall multipronged strategy, new messaging must be developed to address this specific problem.

Of course, economic opportunity will always be an important consideration in everyone’s lives (and votes), but without a simple and effective narrative on this issue, Republicans must recognize that the economy alone will no longer drive urban voters to their side.

No, stupid, it’s not about the economy for most low-income voters. If it were, the record-high inflation and resulting loss of relative income, the recent recession, exorbitant energy prices, and a dismal 2023 national economic outlook would have driven them to change their voting patterns, but they didn’t.

For that reason, two obvious questions must be asked.

First, why is the “economy” no longer a driving issue to low-income voters? My theory is that the government provides so much public assistance to so many in need in so many ways that they suffer far less from the very same economic downturns that so greatly impact most working families.

Those who have become dependent on the welfare state know that government aid will always be there for them. Presumably then, their votes aren’t primarily driven by economic concerns.

The second question: Is there an issue that’s more important to underserved inner-city voters than the economy?  Yes. It’s the uncomfortable issue category of “culture wars.”

Republican candidates, in large part, refuse to engage on these controversial topics, often almost completely ignoring them, instead choosing to focus on pocketbook issues and vague solutions that clearly aren’t winning over this constituency.

Why? Because that’s how these candidates have been counseled by the national party and by their ill-informed campaign advisers.

More on that shortly, but first, let’s take a step back and look at how we got here.

Commentator Pat Buchanan was right more than 30 years ago when he talked about the great “culture wars” facing America, lamenting that only one side (the Left) was actively engaged in the fight.

I can validate Buchanan’s concerns from my own experience. When I founded my conservative think tank in Rhode Island in 2011, leaders of the national association of which we are a member repeatedly warned me—and the entire network of state policy think tank leaders—not to engage in thorny cultural issues, and instead focus on economic policy research and advocacy.

At our national convention that year, however, the final speaker at a sparsely attended send-off breakfast disagreed. He passionately argued that as a movement, we could not ignore the cultural battles that were emerging and that those cultural issues are inextricably tied to economic issues.

His words stuck with me, and I’m sure that not even he could have imagined the cultural rot that is now overtaking our society and is being indoctrinated into K-12 students.

Personally, I’m tired of ceding the cultural battlefield to the woke Left. Look at where that has gotten us. Nationally, by leaving our flanks wide open, the Left marched right in—uncontested—to win victory after victory in our society and in our schools. It’s a disaster.

The divisive, controversial, and age-inappropriate racial, sexual, and anti-American propaganda that are being inculcated in our children are not supported by the vast majority of our nation’s citizenry. The Left currently owns most of the territory on this battleground, yet we on the Right have not even begun to coordinate the massive efforts that will be required to oust them.

But there is hope. Because the political Right owns the moral and populist high ground on these issues, this is a war that can be won—but only if conservatives and Republicans choose to engage.

Now is the time to prepare new battle plans to win across this important cultural landscape, to this targeted constituency—and deemphasizing economic issues as secondary.

Why? Because as compared with their own personal economic condition, I think minority parents are more emotionally invested in the outlook for their children—educationally, economically, and morally.

It’s one thing for them to struggle with their family budgets, but with dependable public assistance, these financial problems can often be mitigated. It’s a completely different thing to mess with their children.

To deny a good education to these already disadvantaged students and to lower expectations; to deprive them of a fighting chance to live a successful life; to force upon them perverted concepts that are counter to their own proud black and Hispanic cultures and family values; to see government infringe on their rights as parents to make vital educational and health decisions for their sons and daughters; and to realize that their kids are being used as political pawns to advance special-interest agendas are bridges too far.

No, it’s not about the economy. It’s about our kids and the cultural indoctrination that is poisoning their futures.

For all the talk about taming inflation and curbing out-of-control illegal immigration as part of their many commitments to Americans, most Republicans failed to provide any meaningful promise to preserve parental rights and to fight for policies that will provide greater opportunities for poor and underprivileged children.

As far as I know, no campaign raised awareness about the federal money pipeline that is coercing local public school officials to adopt far-left ideologies or about the government-recommended school lockdowns that set our children so far back in their education.

Very little was discussed about empowering parents, if they disagree with those ideologies, to determine the best educational path for their children, by enabling public educational dollars to follow the student to any public, private, religious, secular, or homeschool of their choice.

Few Republican candidates—and few, if any, in the mainstream media—made a major issue of the serious questions that should have been raised: What is a woman? Should biological men be allowed to compete in women’s sports? Do you want your dark-skinned children to be viewed as incapable and to distrust those with white skin? Should taxpayer dollars be spent on providing late-term or partial-birth abortions? Should any minor child be able to obtain an abortion or gender-conversion drugs and surgery without their parents’ approval?

Virtually nothing was discussed on the campaign trail about how teachers unions overtly support these divisive and controversial teachings in schools and how they are blocking reforms that would enhance educational freedom for families.

Parent power is experiencing strong and growing momentum across our nation, especially when it comes to how the woke culture is negatively impacting the achievement and emotional health of children. Urban families care just as much about their children’s future as suburban and rural families do about theirs.

How is it that 75% of the electorate can feel the country is headed in the wrong direction, yet Republicans were not swept into power in a massive red wave? This is how: Republicans failed to recognize and address these cultural concerns among this important urban voter base.

Based on feedback from concerned moms and dads on my video podcast in Rhode Island, a strategy to directly address those kinds of parental concerns would be successful across all non-woke voting cohorts in the country.

Creating a clear contrast with your opponent is what political campaigns are about. At the core cultural level, few Republicans even made an attempt to draw that contrast for voters on questions and issues that would most clearly delineate which candidates are living in the real world and which are living in the woke land of make-believe.

Govs. Ron DeSantis in Florida and Glenn Youngkin in Virginia have proven that a bold, fearless, and relentless battle against the extreme Left, especially in our classrooms, is a political winner. Will Donald Trump take up this issue?

That’s how it’s done, and that’s how it should be done. It’s called leadership, bucking the status quo and the conventional wisdom to take a principled stand and to persuade others to join you in the battle.

It’s not too late. Yet Republicans continue to cling to the “it’s the economy, stupid” mantra and ignore the riskier cultural issues, so they will continue to underperform.

In this case, the risk is small. The cultural issues of today are not the same “third rail” cultural issues of a few decades ago. Standing up for children, parental rights, a great education, and pro-American values are still mainstream in America.

The potential rewards, as we saw in Florida, can be enormous. The opportunity is teed up for Republicans to hit out of the park. But will they even take the swing?