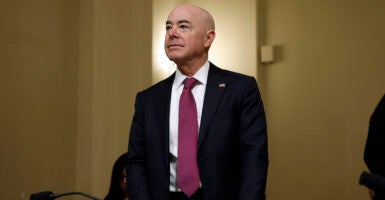 This is why today I am calling on the secretary to resign. He cannot and must not remain in that position. If Secretary Mayorkas does not resign, House Republicans will investigate every order, every action and every failure to determine whether we can begin an impeachment inquiry.

McCarthy is expected to be elected speaker of the House when Republicans take over Jan. 3 with a slender majority over Democrats.

Rep. Jim Jordan, R-Ohio, the likely next chairman of the House Judiciary Committee, which oversees impeachment inquiries, weighed in on McCarthy’s comments on Twitter.

“Americans deserve accountability for the unprecedented crisis on the southwest border,” Jordan tweeted.

House Republicans have talked about impeaching Mayorkas for months as the crisis at the southern border has intensified ever since Biden’s inauguration Jan. 20, 2021.

U.S. Customs and Border Protection, part of the Department of Homeland Security, reported a record of more than 230,000 encounters in October with illegal migrants at the border. Fox News reported that CBP estimates about 64,000 “gotaways” in October, meaning illegal aliens who ran rather than surrendered to the Border Patrol.

In addition, about 100 individuals on the government’s terrorist watchlist were apprehended at the border in 2022.

Mayorkas has insisted under sworn testimony before Congress that the southern border is secure and that his department has “operational control” of the border.

Rep. Dan Bishop, R-N.C., last week asked Mayorkas during his appearance before the House Homeland Security Committee: “Secretary Mayorkas, do you continue to maintain that the border is secure?”

Mayorkas replied: “Yes, and we are working day in and day out to enhance its security, Congressman.”

Although three presidents have been impeached by the House, impeachments of Cabinet secretaries are rare.

In 1876, the House impeached the Grant administration’s War Secretary William Belknap on corruption charges. The Senate voted to convict Belknap on all five articles of impeachment.

This report has been updated with details of remarks by McCarthy, Jordan, and Roberts.