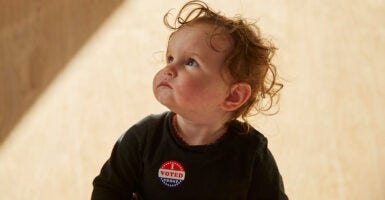 A group of medical doctors and organizations has filed a lawsuit against the U.S. Food and Drug Administration over its approval of chemical abortion drugs.

The Christian legal organization Alliance Defending Freedom filed suit in federal court Friday on behalf of four physicians and four groups, including the American Association of Pro-Life Obstetricians and Gynecologists.

“We’re asking the court to order the FDA to withdraw chemical abortion drugs from the market in the United States,” Julie Marie Blake, one of the Alliance Defending Freedom attorneys handling the case, told The Daily Signal.

The plaintiffs also include the Alliance for Hippocratic Medicine, the American College of Pediatricians, the Christian Medical & Dental Associations, and the four individual doctors: Shaun Jester, Regina Frost-Clark, Tyler Johnson, and George Delgado.

In 2000, the Food and Drug Administration approved the use of a drug called mifepristone (brand name Mifeprex) with another medication, misoprostol, to terminate a pregnancy. In 2016, the FDA had removed an in-person requirement for dispensing mifepristone and authorized its use for up to 10 weeks after a woman’s last period.

The process of a chemical abortion begins when a woman takes mifepristone, which blocks the baby in the womb from receiving the hormone progesterone. Without progesterone, the lining of the uterus deteriorates, ultimately resulting in the unborn child’s death.

Usually, one or two days after taking mifepristone, women take the second pill, misoprostol, to complete the abortion. Misoprostol causes a woman to have contractions that eventually expel a dead baby from her uterus.

Women usually undergo chemical abortions at home. Planned Parenthood offers abortions pills at many of its clinics and explains on its website how women may get abortion pills mailed to their home in certain states.

“Too often, women aren’t hearing the facts and risks of these drugs from Planned Parenthood and other pill pushers,” Israel told The Daily Signal, adding:

Meanwhile, the FDA hasn’t done its job to ensure women and girls aren’t being harmed by these drugs. On the contrary, the FDA has time and time again weakened safety protocols at the behest of the abortion industry and at the expense of women and girls’ health and safety. It’s unacceptable. Women and girls deserve better, and this lawsuit is a welcome opportunity to correct a grave wrong.

The Daily Signal asked the Food and Drug Administration for comment on the lawsuit and received the following response: “The FDA does not comment on possible, pending or ongoing litigation.”

Blake, the attorney for those suing FDA, says the lawsuit is being brought now rather than sooner because it took time to get past “the FDA stonewalling.” She said:

The FDA has a really problematic regulation that says … , ‘If you want to challenge the lawfulness of what we did, you can’t just go to court right away. You have to file a citizen’s petition with us where you ask us to change our mind.’

After the Biden administration’s denial of the petition, the medical professionals filed the lawsuit against the FDA.

“The FDA is responsible for protecting the health, safety, [and] welfare of all Americans,” Blake said, adding that the agency “approved chemical abortion drugs [and] has failed to protect the safety of women and girls by exposing them to drugs that are dangerous and never properly studied for safety, and that never, under the law, were allowed to be approved in the first place.”

A report from the pro-life Charlotte Lozier Institute on chemical abortions states: “Between 2000 and 2019, over 3,800 adverse events were reported to the FDA, including at least 20 deaths, more than 500 life-threatening complications, and over 2,000 severe complications.”

However, Advancing New Standards in Reproductive Health, a research program at the University of California San Francisco, says “the safety of the [abortion pill] treatment has been reaffirmed by rigorous research that supplements monitoring data from the FDA.”

Alliance Defending Freedom filed the lawsuit in U.S. District Court for the Northern District of Texas, Amarillo Division. The legal organization asked the court for a preliminary injunction to stop the sale of chemical abortion pills while the case moves forward.

Blake said she hopes the court will rule within weeks on the request for the injunction.