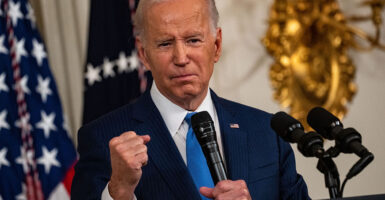 President Joe Biden responds to a question during a press conference Nov. 9, the day after the midterm elections, in the State Dining Room of the White House. (Photo: Kent Nishimura/Los Angeles Times/Getty Images)

In the wake of the midterm elections, President Joe Biden was asked during a rare press conference—in reference to Twitter’s new owner—whether he thought Elon Musk was a threat to national security. With a pause and a smirk, the president said that topic was “worthy of being looked at.”

With those words, Biden made it clear that if you even seem to oppose his politics, your private life will be under the direct scrutiny of the state. Despite his constant prattle about saving our democracy, Biden seems to think he’s running an authoritarian police state.

In truth, the federal government already maintains entities that review acquisitions such as Musk’s for anything from foreign influence to anti-competitive business practices. After many months in which Musk’s negotiations to purchase Twitter happened in full public view, Treasury Secretary Janet Yellen said last week that she sees no basis for the government to investigate that purchase.

Despite Musk’s having followed the law, Biden, on a whim, wants to change the game. Suddenly, and after years of Twitter and other social media having significant foreign investors, a normal and transparent voluntary transaction is a potential “threat to national security.”

Biden signaled his desire to strip off the veneer of the rule of law and use the power of the presidency as a dictator would—by his whim and without respect for the rules that everyone else must abide by.

It is important to remember that, unavoidably, all government actions are rooted in government’s coercive power. As such, it is crucial for the federal government to act within the bounds of the Constitution and in a precise and careful fashion to avoid lurching into tyranny.

The mechanisms of our Constitution lay out one sacred duty of the federal government—to protect each of our natural rights. The Framers intended this design to ensure that the government could not interfere arbitrarily with civil society. The goal was to ensure protection of rights and not otherwise invade our personal lives with the coercive whims of bureaucrats and politicians.

With the protection of our individual freedoms, America developed a strong and flourishing civil society and became the most prosperous and advanced nation on Earth—a beacon of liberty and a model for the rest of the world.

A core component of our civil society is the free market. It is a system where everyone’s natural rights are defended and where everyone plays on the same field and by the same rules. A free market is a place where talent and determination are not suppressed and where innovations lift the standard of living for all.

Tragically, our free society has given way to increasing government manipulation—weakening our communities and civic institutions along the way.

Niche corporate and political interest groups stopped focusing on how to produce value for other people and instead on how to persuade politicians to regulate in their favor—a system where you’re rewarded for wielding the manipulative power of government, not for providing value to society.

We stand now at a place where the federal, local, and state governments consume and redirect more than a third of what Americans work hard to produce, and where the burden of regulations is an additional quarter of our economy. Put differently, out of your five-day workweek, two days are there just to feed the government.

This isn’t the free society and free market our Founders envisioned, where the government serves the people. This steady fall into a controlled society has been the playbook of the Left—a callous shortchanging of most families to concentrate power and money in the hands of a well-connected few.

What does it say of our nation if the president, with no accountability and in deference to no law or electorate, can on a whim command the people as if he regards us all as his property? What does it say that the president can marshal the force of government against a single individual for simply not sharing his politics?

With his shameful comment on Musk and Twitter, Biden made it clear that the rules apply as he sees fit, to whom he sees fit. There can be no prosperity in a country where your right to the fruits of your labor is not sacrosanct, and where the law is applied unevenly to favor those connected to the regime.

The Biden administration has acted with reckless irreverence toward our institutions and continued the intentional chipping away of the rule of law. The administration increasingly has weaponized the federal government against the American people.

We’ve seen the Biden administration come for industry after industry and sap the strength of our nation through an onslaught of regulations. He has unleashed an inflationary plague that already has stolen $7,400 from the average American family.

One need only look to the coal industry to see the honorable and necessary occupations that Biden now attacks. If history is any guide, heads of state who recklessly abuse the natural rights of their people rarely curtail their own crusade.

Biden may have directly named Elon Musk at that press conference, but his threat was aimed at every household in America.