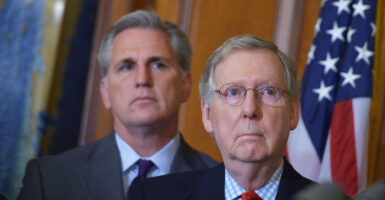 At a time when the integrity of our institutions is under scrutiny, honoring the will of the American people and the historical precedent of Congress should be a priority. Pictured: Senate Majority Leader Mitch McConnell stands next to House Republican Leader Kevin McCarthy, expected to become the next House speaker, during a signing ceremony Feb. 13, 2015, in the Capitol. (Photo: Mandel Ngan/AFP/Getty Images)

Joshua Beauchamp is a member of the Young Leaders Program at The Heritage Foundation. 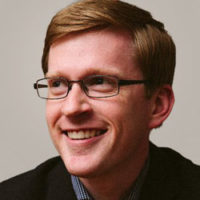 It’s official: Republicans have won a majority in the U.S. House of Representatives. The clock is ticking on the 117th Congress, whose final session, an infamous lame-duck session, recently commenced.

It’s expected to be a busy time on Capitol Hill for Democrats as they seek to take as much ground as possible before Republicans take the House speaker’s gavel Jan. 3. A chief goal for congressional Democrats (and, it must be said, several Senate Republicans) in the lame duck will be to pass an omnibus appropriations bill that funds the government through fiscal year 2023.

Snatching the power of the purse away from the House Republicans the American people just sent to Washington to represent them, however, would be a gross violation of the people’s interests and democratic norms. It also would violate historical precedent.

Since 1994, control of the House has changed hands in four midterm election cycles (1994, 2006, 2010, and 2018). Never before has the outgoing House majority passed an omnibus appropriations bill during the lame-duck session following the election.

In the historic 1994 election, Republicans won a majority in the House for the first time in 40 years. But the 103rd Congress had already done its job, passing 13 appropriations bills before the lame-duck session. No appropriations bill of any kind was enacted during the lame duck.

In the 2006 election, Democrats took both chambers, the House and the Senate. The outgoing Congress proposed 11 appropriations bills for fiscal year 2007, but just two were passed before the lame-duck session. During that session, lawmakers passed two short-term continuing resolutions extending the date of appropriations through February.

In the 2010 elections, Republicans retook the House. The 111th Congress failed to pass any regular appropriations bills, so three continuing resolutions were passed to extend government funding.

The precedent is clear. In modern American history, no Congress has passed an omnibus appropriations bill during a lame-duck session following a shift in power in the House. To do so this year would be a violation of congressional precedent and a finger in the eye to the millions of Americans who voted for new leadership in the House.

In a day and age where the integrity of our institutions is continually under scrutiny, honoring the will of the people and the historical precedent of Congress should be a priority.

The 117th Congress should pass a short-term congressional resolution that provides stop-gap funding until early 2023, then allow the 118th Congress to do the job it was sent to Washington to do.