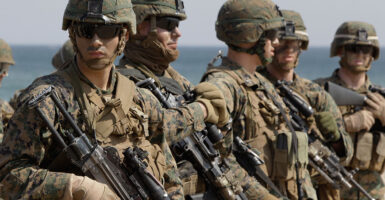 For example, the report details examples of critical race theory being taught at military academies across branches, saying they “reflect broader trends in the armed forces.” The report refers to training materials, obtained through a formal records request, in which West Point cadets are lectured on white privilege.

The chairman of the Joint Chiefs of Staff defended teaching CRT [critical race theory] at U.S. Service Academies and testified to Congress about his desire to understand ‘white rage.’ He argued that American taxpayer money should be spent to ensure cadets and midshipmen learn what ‘caused thousands of people to assault [the Capitol] Building and try to overturn the Constitution of the United States.’ The Biden administration is choosing to focus on and fund the study of racial extremism even when—as the [Countering Extremist Activity Working Group] showed—it is a virtual non-issue in the military.

In another example, the report points to a slide presentation for the Air Force Academy titled “Diversity & Inclusion: What it is, why we care, & what we can do.” The presentation warns cadets to avoid gendered language, including terms such as “mom” and “dad.”

Focusing on what is different among us, rather than that which unites us, only serves to foster division and discontent among service members. We need look no further for evidence of this than the recent egregious example of an attempt to use taxpayer money and [Defense Department] property to host a drag queen story hour for children at the library on Ramstein Air Force Base in Germany to promote ‘inclusivity’ during pride month.

That event was thankfully canceled after Sen. Rubio sent a letter censuring the Air Force for considering placing children in a sexualized environment, but it greatly concerned service members and their spouses. Moreover, it sent a message that discouraged potential newcomers from joining up.

The report also points to the Diversity, Equity, and Inclusion official for the Department of Defense Education Agency, which is tasked with educating the children of service members and Defense Department civilians.

That’s why having a radical extremist like Kelisa Wing as Chief Diversity Equity and Inclusivity (DEI) Officer at DODEA is completely insane. In 2020, Wing tweeted: ‘I’m exhausted with these white folx in these [professional development] sessions. [T]his lady actually had the CAUdacity to say that black people can be racist too. … I had to stop the session and give Karen the BUSINESS.’ (Caudacity is a derogatory word to describe the audacity of white people.)

Wing also wrote a book to teach white children that they have white privilege and that ‘white privilege hurts a lot of people.’ The book comes with an exercise to help kids understand ‘what parts of my identity have provided me with privilege.’ This racist bigotry from a DEI [diversity, equity, and inclusion] specialist is par for the course, but given the unique position [that] service members with kids in DODEA [Department of Defense Education Agency] schools are in, this is completely and utterly unacceptable.

Rubio argued this focus is a distraction for the nation’s armed services.

“Rather than making the case for American greatness and protecting our nation, the military is parroting woke nonsense. It’s dumb, it doesn’t work, and it’s dangerous,” Rubio said. “We need to spend more time thinking about how to counter Chinese aircraft carriers and less time thinking about pronouns.”

But Army Maj. Charlie Dietz, a spokesman in the Office of the Secretary of Defense, pushed back against the Rubio-Roy report.

“Diversity, inclusion, and equality at its core is about leveraging the strengths of all our people, advancing opportunity, addressing potential barriers or discrepancies, and—fundamentally—ensuring people are treated with dignity and respect,” Dietz told The Center Square. “We always talk about weapons systems, yet every one of us will agree that our greatest weapons system are our people. So that’s why our policies to better leverage our people and increase unit cohesion are important here.”

The two Republican lawmakers disagree and are calling for an end to this kind of practice, saying it hurts cohesion, military readiness, and recruitment.

“The Department of Defense’s priority should be training the men and women of our armed forces to be a united, lethal, and battle-ready force primed to defend the United States and her interests at a moment’s notice,” Roy said.

“Instead, Biden’s woke Pentagon is using taxpayer dollars to promote blatant anti-American ideology. It has to stop. We need to end this politicization of our military and keep our armed forces focused on defending our national security.”