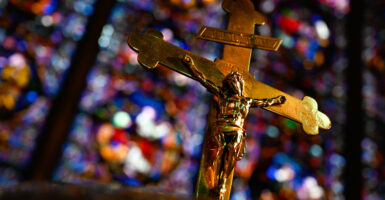 Republican Utah Sen. Mike Lee is urging the 12 Republican senators who voted for the so-called Respect for Marriage Act to oppose cloture on the legislation unless Lee’s amendment is added to the bill.

“The free exercise of religion is absolutely essential to the health of our Republic,” the senator wrote in a “Dear Colleague” letter first obtained by The Daily Signal, signed by 20 of his Republican colleagues. “We must have the courage to protect it.”

The letter is chiefly directed at the 12 Republican lawmakers voted for advancing the Respect for Marriage Act, The Daily Signal has learned.

And it is a move acknowledging that the battle over the Respect for Marriage Act is not yet over: Wednesday’s vote merely allowed the debate over the bill to move forward, and the lawmakers have yet to break the filibuster on the underlying bill. The 12 who voted for the bill still have a chance to reverse course.

Lee’s “Dear Colleague” letter notes that Obergefell “did not make a private right of action for aggrieved individuals to sue those who oppose same-sex marriage” or “create a mandate for the Department of Justice to sue where it perceived an institution opposed same-sex marriage.”

“But the Respect for Marriage Act will,” the senator warned. “What we can expect should this bill become law is more litigation against those institutions and individuals trying to live according to their sincerely held religious beliefs and moral convictions.”

If Congress does decide to “codify Obergefell and protect same-sex marriages,” as the legislation proposes, Lee insisted that “we should make explicitly clear that this legislation does not constitute a national policy endorsing a particular view of marriage that threatens the tax exempt status of faith-based non-profits.”

“As we move forward, let us be sure to keep churches, religious charities, and religious universities out of litigation in the first instance,” the senator continued. “No American should face legal harassment or retaliation from the federal government for holding sincerely held religious beliefs or moral convictions.”

Lee emphasized that his amendment would “ensure that federal bureaucrats do not take discriminatory actions against individuals, organizations, nonprofits, and other entities based on their sincerely held religious beliefs or moral convictions about marriage by prohibiting the denial or revocation of tax exempt status, licenses, contracts, benefits, etc.”

“It would affirm that individuals still have the right to act according to their faith and deepest convictions even outside of their church or home,” the senator continued.

Lee’s amendment has been praised by a slew of conservative leaders and commentators, including Heritage Action executive director Jessica Anderson, who said Friday that it provides “essential protections for religious freedom.” (The Daily Signal is the news outlet of the Heritage Foundation)

“Anything less than the Lee amendment would give the Left yet another opportunity to force their radical social agenda on the American people and punish organizations or individuals who don’t comply,” said Anderson.