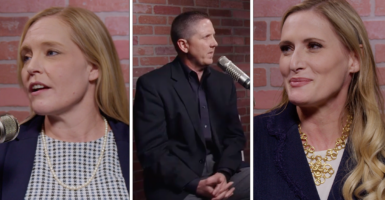 From left, Republican Reps.-elect Laurel Lee of Florida, Josh Brecheen of Oklahoma, and Erin Houchin of Indiana will be coming to Washington as part of the 118th Congress in January. (Photos: The Daily Signal)

It’s been a little more than a week since the 2022 midterm elections.

The Republican Party is projected to win a narrow majority in the U.S. House of Representatives, while the final partisan split of the U.S. Senate remains up in the air after the Georgia Senate race advanced to a runoff election, to be held on Dec. 6.

The 118th Congress is set to convene on Jan. 3, and a trio of incoming freshmen—Reps.-elect Laurel Lee, R-Fla.; Josh Brecheen, R-Okla.; and Erin Houchin, R-Ind.—shared with The Daily Signal what they are most hopeful for as they prepare to head to Washington, D.C.

“Well, I’ll tell you, we’re off to a really good start in getting to know the other new members. I am very hopeful that the Republicans who are going to be serving together in this next Congress can bring forward a set of policy ideas that really resonate with the American people,” Lee said.

But at the same time, we also need to be presenting a vision of Republican leadership and policy goals and what that looks like for us.

So, for me, I think the thing that I’m the most excited about and interested in is being part of communicating that vision to the American people.

Lee defeated Democratic challenger Alan Cohn with 58.5% of the vote to win the seat representing Florida’s 15th Congressional District, Ballotpedia reported. According to her campaign website, Lee served as Florida secretary of state, appointed to the post by Gov. Ron DeSantis, R-Fla.

Brecheen previously served in the “Oklahoma state Senate, where [he] stood strong against tax increases, debt, wasteful spending and … led the fight against Common Core in our schools,” his campaign website said. He won his race with 72.4% of the vote, Ballotpedia reported, beating Democrat Naomi Andrews and an independent in Oklahoma’s 2nd Congressional District.

“I’m hopeful that our nation will awake. I believe, as a Bible-believing Christian, that as John Adams said, ‘We have no government armed with power, capable of continuing with human passions, unbridled by morality and religion, and he goes on to say, … ‘avarice,’ which means extreme greed. Think about why we continue to spend like we do: ‘Avarice ambition,'” Brecheen, 43, told The Daily Signal.

Think about politicians. Avarice ambition and revenge will break the strongest cords of our Constitution as a whale goes through a net. Our Constitution was made only for our moral and religious people.

I am hopeful that our culture will come alive with virtue, which means moral excellence, a return of biblical truth in our nation that made us great for hundreds of years, and we have become wise in our own eyes and foolish because we’re throwing away what made us great.

“Oh, my goodness. I’m hopeful that we can get some actual governing conservative policies done. I think that as leaders, Republicans are right on these issues,” Houchin, 46, said. She won her district with 64.2% of the vote, Ballotpedia reported, defeating Democrat Matthew Fyfe and Libertarian Tonya Mills.

“Conservatives are right on these issues. Americans agree with us on most of these policies, and they want to see us take some action. So I’m hopeful that our incoming class will be a strong voice for these conservative governing policies,” she said.

Lee, Brecheen, and Houchin joined “The Daily Signal Podcast” to discuss their campaigns further, what issues they ran on, and what House Republicans should investigate in committees if, as projected, they take back the majority.