‘Not Permitted in the Public Square’: How 1 Australian Christian Was Forced to Resign 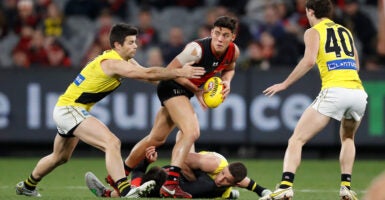 Jye Caldwell of the Essendon Bombers, an Australian rules football team, is tackled by Trent Cotchin of the Richmond Tigers during an Australian Football League match on Aug. 20 in Melbourne, Australia. A Christian man was offered a job as CEO of the Essendon team, but he was forced out by opposition from the intolerant LGBT Left. (Photo: Dylan Burns/AFL Photos/Getty Images)

Andrew Thorburn had no idea the whirlwind he was in for when he accepted the job of chief executive of the Australian Football League club Essendon. He would be pressured to resign just over 24 hours after taking the job.

At the center of this controversy was not a personal scandal, nor an accusation of being unqualified. Rather, it was his association with City on a Hill Church, where he served as chairman.

It didn’t take long after Thorburn accepted the role in September for activists to dig up publicly available sermons from the church about God’s design for marriage and about the value of human life, including unborn lives. When these were brought to light, the punishment was swift.

Essendon President Dave Barham stated, “We acted immediately to clarify the publicly espoused views on the [church’s] official website, which are in direct contradiction to our values as a club.” Thorburn barely had a chance to start his role before he was pressured to resign.

A reaction like that might lead you to think that the church was caught up in inappropriate behavior or teachings. That’s far from the case. Thorburn’s church didn’t express anything that is at all out of the ordinary for the Christian. The source of public controversy was that the church had articulated a biblical understanding of sexuality and a proper Christian response to the tragedy of abortion.

For Thorburn, the takeaway was obvious. He said, “My personal Christian faith is not tolerated or permitted in the public square.” It’s a sobering statement for Christians in the West.

Australian media were quick to condemn Thorburn, saying that it wasn’t simply that he attended that church, but he was a chairman of the church—a church that had featured sermons with biblical views on homosexuality and abortion. But when the pastor of City on a Hill Church, which found itself at the center of the controversy, Guy Mason, was pushed on the issue on national television, he fumbled.

Interviewer David Koch told Mason, “Calling homosexuality a sin is not love. It’s not inclusion. There are so many other churches that are tolerant, are inclusive. You all read the same book. Why do you have this hard line and not-so-loving view?”

While Mason deflected the question, the answer for Christians is obvious. Koch is wrongly conflating affirming an LGBT identity with love. Anglican minister Calvin Robinson recently answered similar accusations, saying, “Of course, Christ loves everyone, but [he] doesn’t want us to stay the way we are. Christ spent time with sinners—but the sinners went away changed, not Christ.”

That reining in of sexual desires and instead redirecting our affection to the natural order of marriage between one man and one woman is love. Loving our neighbor does not mean affirming any desire. It means being truthful about what’s best for people with kindness and understanding. Christians have every right—indeed, a responsibility—to advocate for a lifestyle and a marriage policy that they believe is best for people. It is not something to shy away from.

Yet, it’s no wonder that Mason was nervous to present his beliefs to the public. Christianity is regularly maligned in mainstream media. The reaction of the football club demonstrates just how far outside of the mainstream core Christian teachings have become in Western societies.

With the marginalization of Christian beliefs and the rejection of Judeo-Christian values, there is reason to be concerned about rising hostility to Christianity. Even Western governments are increasingly comfortable openly targeting Christians for their religious practice and their beliefs. In a report released this July, the Family Research Council documented 99 incidents of government violations of religious freedom against individual Christians or Christian institutions across 14 Western countries since 2020.

Regardless of how anyone feels about Christian teachings rooted in Scripture, everyone should be allowed to have good faith debates about these topics in the public square. Christians ought not back down as soon as someone incorrectly calls our views “hateful.”

A hurting and confused culture needs moral clarity. Holding and respectfully expressing differing views on abortion and homosexuality should be the norm in Western societies as we continue to debate key social issues. Sadly, Essendon football club’s decision to placate LGBT activists required a competent Christian professional to lose his job.

As the U.S. Senate tries to pass a bill to codify same-sex marriage, it’s important to remember the dangers that poses to religious freedom. When a political social agenda is valued above religious freedom, Christians will increasingly face hostile work environments. We must be prepared to articulate our beliefs with kindness and to defend the right for those of all faiths, or no faith, to do the same.