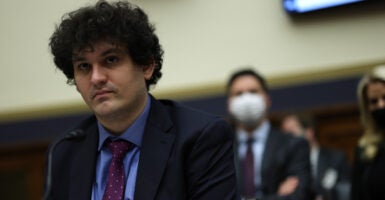 House Democrats, in one of their final acts in the majority, will lead a hearing about the bankrupted cryptocurrency firm FTX whose CEO donated heavily to Democrat politicians.

On Wednesday, the House Financial Services Committee announced it would conduct a hearing in December into the collapse of FTX and the broader consequences for the “digital asset ecosystem.”

The committee hopes to have Sam Bankman-Fried, the chief of both FTX and its related hedge fund Alameda Research, as part of the hearing. It also plans to include Binance, a rival cryptocurrency exchange that has offered to buy FTX. FTX filed for Chapter 11 bankruptcy last week.

The Daily Signal reported Tuesday that Gabe Bankman-Fried, the brother of the FTX CEO, is a former staffer for Rep. Sean Casten, D-Ill., a member of the House Financial Services Committee. A spokesperson for Casten’s office has not responded to inquiries on the matter Monday and again on Wednesday after the hearing announcement.

Democrats will be leading on an investigation of someone who has been a political ally. Sam Bankman-Fried donated almost $38 million to Democrat candidates and liberal causes during the 2022 midterm cycle. He made an individual contribution of $2,800 to Joe Biden’s 2020 presidential campaign.

“They should be the subject of the hearing, not holding it,” Howell told The Daily Signal. “They allowed this to happen on their watch.”

Neither spokesperson for Democrats nor Republicans on the House Financial Services Committee responded to inquiries from The Daily Signal about the FTX CEO’s brother previously working for a committee member.

“Unfortunately, this event is just one out of many examples of cryptocurrency platforms that have collapsed just this past year. That’s why it is with great urgency that I, along with my colleague Ranking Member [Patrick] McHenry, announce the Committee’s intention to hold a hearing to investigate the collapse of FTX,” Waters said in a public statement.

“As chairwoman of the Financial Services Committee, I have led the effort in examining and investigating the digital assets marketplace, and know that we need legislative action to ensure that digital assets entities cannot operate in the shadows outside of robust federal oversight and clear rules of the road,” Waters added.

McHenry, R-N.C., is the ranking member of the committee and will likely be the chairman in January with the new Republican majority.

“Oversight is one of Congress’ most critical functions and we must get to the bottom of this for FTX’s customers and the American people,” McHenry said in a statement. “It’s essential that we hold bad actors accountable so responsible players can harness technology to build a more inclusive financial system. I appreciate Chairwoman Waters’ working with Republicans to deliver accountability through a bipartisan process.”