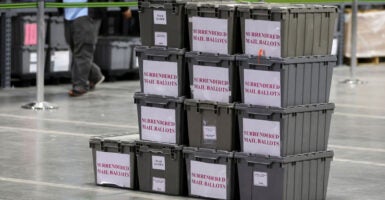 Empty crates that contained surrendered mail ballots that were turned in at polling places by people who used machines to vote are stacked at the Clark County Election Department after polls closed on Nov. 8, 2022, in North Las Vegas, Nevada. (Photo: Ethan Miller/Getty Images)

2020 was the first time Nevada’s elections were conducted by mass vote by mail. 2020 should have been the last time Nevada relied on the United States post office to run an election.

The warning signs were there. Photos from 2020 showed mail ballots blowing in the winds on Nevada roads. Some went to vacant lots and mines. Others ended up in landfills.

In Clark County alone, over 92,000 mail ballots were returned as undeliverable, meaning they went to the wrong address and never reached the intended recipient. To put this figure into perspective, President Joe Biden won the state by just over 33,000 votes. When you send more ballots to faulty addresses than the difference between winning and losing a state’s Electoral College votes, that is a core system failure.

Nevada voter rolls are also a mess. They contain duplicates, the dead, and the disappeared—people who long ago moved away, according to the Public Interest Legal Foundation. Yet this faulty list is the list of people automatically mailed ballots.

Mass vote by mail should have been a one-time experiment in 2020. Unfortunately, it wasn’t.

Let’s be clear, the delay in learning election results in Nevada and elsewhere is driven wholly by vote by mail. Without universal mail voting, we would mostly know who won elections on election night.

Vote by mail also disenfranchises voters. The United States Postal Service has set the goal for political mail arriving on time at 94%. That’s another way of saying 6% failure is acceptable.

When you vote in person, you can see your ballot count. You know the system worked when your ballot is tabulated in person. But 94% has worse odds than the slots, where the house usually takes a percentage or two.

In 2020, over 550,000 mail ballots were rejected by election officials across the country. This happened because mail voting is more complicated than voting in person. If a voter forgets to add a date or sign the ballot envelope, disenfranchisement. An in-person voter can spoil a ballot and get a new one if they make a mistake.

We shouldn’t put the post office in a position of power to decide election outcomes. I get my neighbor’s mail far too often to make that bet.

Elections should be conducted with transparency in person. Unfortunately, elections with razor-thin margins mean chance and the competency of the post office played a role in the outcome we shouldn’t accept. Nevada deserves better.