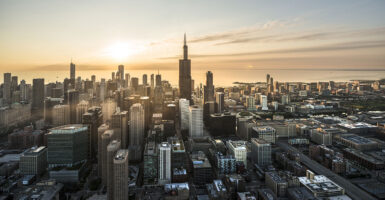 A total of 27 of the 102 counties in Illinois are exploring the possibility of leaving the state because of the influence that Chicago and Cook County have on political decisions.  (Photo: Getty Images)

A growing list of Illinois counties disenfranchised with the goings-on in Cook County have voted in nonbinding resolutions to leave Illinois and form a new state.

Residents in three more counties—Brown, Hardin, and a portion of Madison County—voted in favor of a nonbinding resolution allowing their county board to explore the possibility of leaving the state, bringing the total to 27. In all, three counties—close to 75% of residents—were in favor of the idea. Illinois has 102 counties, with Cook the most populous.

The driving force behind the referendums was to allow the county board of each area to coordinate with other county boards to explore the possibility of leaving Illinois because of the influence that Chicago and Cook County have on the state’s political decisions.

In Brown County, the ballot question read: “Shall the board of Brown County correspond with the boards of the other counties of Illinois outside of Cook County about the possibility of separating from Cook County to form a new state, and to seek admission to the union as such, subject to the approval of the people.”

Only Congress has the power to create new states, but there never has been a formal agreement on how the process should take place.

Merritt said a driving force behind the expanding movement is that many southern Illinoisans want to be heard regarding issues that affect the state as a whole.

Merritt said a resolution is expected to be filed in January to begin the process.

This is not the first time frustrated downstate Illinoisans have lobbied to split from the state. In the 1970s, residents of western Illinois declared themselves “Forgottonia” as a protest against the government’s failure to improve the transportation infrastructure.

Originally published by The Center Square.

Kevin Bessler reports on statewide issues in Illinois for The Center Square. He has over 30 years of experience in radio news reporting throughout the Midwest.