Donald Trump Announces He Will Run for President Again 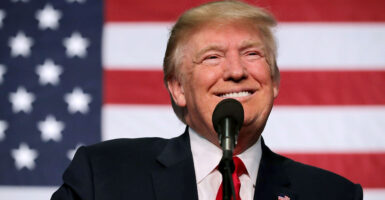 Donald Trump announced Tuesday that he will again attempt to become president of the United States.

“Together we will be taking on the most corrupt forces and entrenched interests imaginable,” Trump said Tuesday evening. “Our country is in a horrible state. We’re in grave trouble.”

The 76-year-old former president made the announcement from his Mar-a-Lago Club in Palm Beach, Florida, on Tuesday evening. Almost two years after President Joe Biden was declared the winner of the 2020 presidential election, most Republicans still acknowledge Trump as the leader of the Republican Party and the most influential GOP politician.

He had teased the announcement ahead of the midterm elections, and on Tuesday morning, said in a post on his Truth Social platform, “Hopefully TODAY will turn out to be one of the most important days in the history of our Country!”

Trump has raised eyebrows by criticizing Florida Gov. Ron DeSantis, also rumored to be considering a 2024 run for president, calling the Republican governor “Ron DeSanctimonious,” and describing him as “an average REPUBLICAN Governor with great Public Relations.”

DeSantis, 44, last week won his reelection campaign in a landslide. Asked by a reporter on Tuesday about Trump’s criticisms, DeSantis responded: “One of the things I’ve learned in this job is, when you’re leading, when you’re getting things done, you take incoming fire. That’s just the nature of it.”

“We’re giving it consideration in our house. Prayerful consideration,” Pence said in an interview that aired Monday on ABC’s “World News Tonight.” As for whether Trump should run again, the former vice president said: “That’s up to the American people. But I think we’ll have better choices in the future.”

Editor’s note: A quote of Trump’s about “grave trouble” has been corrected.