Collegiate Alumni Donations: What Are We Giving To? 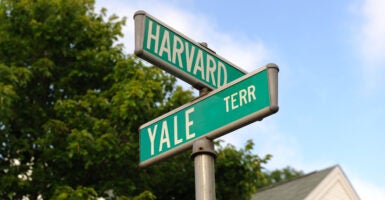 Charitable giving should fulfill the wish of the donor, but conservative alumni of institutions of higher learning can't always count on that happening. (Photo: Vapal/ iStock/Getty Images)

Adam Novak is adviser to the president for donor relations at The Heritage Foundation.

I read a news report about a group of woke Yale students who burst into a panel discussion on civil liberties hosted by the Federalist Society on campus back in March and tried to shout down and intimidate the speakers—who had to be escorted out by the police.

This kind of activity on campus has become so commonplace it barely makes the news anymore. But it struck me, as a former fundraiser for universities, how this behavior—the result of the leftist ideology being taught on campus—is actually being funded largely by well-meaning alumni who donate to their alma maters in the hope that young people will receive the same solid education and values that they did.

What they don’t realize is that the colleges they give to are not the places they once were.

Now, I’m proud of the gifts I raised—the new scholarships, student resources, and research dollars I helped secure. I remain forever grateful to the donors who chose to part with their hard-earned resources to improve lives. But when I see that these colleges have ballooning “diversity, equity, and inclusion” staff salaries, coursework in critical race theory required for graduation, and campus activists bullying of conservatives, I worry the promise I made to those donors might not be kept by those universities.

Charitable giving is a uniquely American thing. When a problem cannot be solved by the marketplace, rather than wait for the government to create a new, inefficient, expensive bureaucracy to fix something, Americans utilize their resources to try to help. This also happens in a few other countries, but never to the same degree. It is classic American exceptionalism.

A cardinal principle in fundraising ethics is to fulfill the wishes of a donor. When you give to your college, you expect the gift to fulfill the emotional and practical inspiration for the gift. Conservatives might be surprised to see how that money is actually spent.

Critical race theory originated on college campuses and has since infected almost every other American institution. This Marxist framework makes race the prism through which its proponents view all aspects of American life, categorizing individuals into groups of oppressors and victims. This is a distinctly anti-American idea.

The great civil rights leaders throughout American history have sought to resolve racial conflict through the framework of the Constitution and Bill of Rights. American sins like slavery and Jim Crow were expunged by exercising freedom of speech and assembly,  and demonstrating that slavery and Jim Crow  were antithetical to the founding principles of this country, even if some of the Framers themselves didn’t practice what they preached.

Critical race theorists, on the other hand, teach that racial injustice is part and parcel of America’s founding principles. In their eyes, America is fully a racist country, and American history and values are “toxic.” As hard as it is believe, those ideas now flourish in higher education and at colleges that once embraced academic integrity and free speech.

And it isn’t just in curriculums that include leftist scholars such as Angela Davis and the late Howard Zinn. Critical race theory is embedded into the institutional hierarchy of higher education. Racial bean counting is included in performance reviews across universities, monitored and controlled by diversity, equity, and inclusion offices.

This is what your gift to your alma mater is paying for.

DEI is now the fastest-growing “industry” in higher education. The salaries of academics—the ones teaching and conducting worthwhile research—have remained flat. Meanwhile, the DEI offices are growing exponentially. On today’s college campus, there are an average of 3.4 DEI staff members per every 100 tenured faculty. They are there to make sure these Marxist ideas are incorporated in every area and office in colleges and universities.

When that letter comes in the mail asking for another gift to your alma mater, that’s what you are paying for.

If you raise these concerns with your alma mater or child’s school, they may point to the existence of the campus conservative paper, a Christian campus outreach group, or a Jewish student group. Even if that’s the case, a portion of activity fees will still go toward operations—meaning that campus activists, encouraged by the DEI officers and deans of students, will still get their portion of your gift.

And I have a hunch the college administration does not make life very pleasant for conservative groups, especially if they have the audacity to criticize the DEI office or campus activists.

As a fundraiser for The Heritage Foundation, perhaps I’m a bit biased in suggesting conservative donors have a better shot at fulfilling their desire to build a freer, more prosperous country with us than their alma mater. But a conservative can have confidence knowing the gift at Heritage will be spent on the causes they believe in; namely, liberty, civil society, and a defense of the American way of life. (The Daily Signal is the news outlet of The Heritage Foundation.)

Charitable giving should fulfill the wish of a donor. Conservatives should carefully examine whether a college or university they support uses the money they send exactly the way they would wish.

If conservative speech, ideas, students, or faculty are not welcome at your alma mater—perhaps your own charitable dollars should go somewhere else.