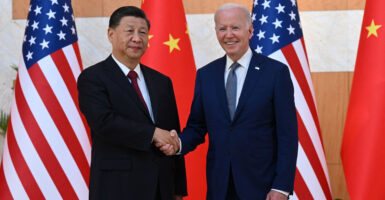 President Joe Biden and Chinese President Xi Jinping meet on the sidelines of the Group of 20 summit in Nusa Dua on the Indonesian resort island of Bali on Monday. (Photo: Saul Loeb/ AFP/Getty Images)

Michael Cunningham is a research fellow in The Heritage Foundation’s Asian Studies Center.

The two met Monday on the sidelines of the Group of 20 summit in Bali, Indonesia, their first in-person meeting of Biden’s presidency. While it’s positive that the two leaders are communicating, the optics of the meeting might have done more harm than good.

If Biden wants to set the U.S.-China relationship on a more favorable track, he must engage Beijing from a position of strength. That’s not what happened Monday.

The timing of the summit couldn’t have been worse. Xi arrived in Bali fresh from the 20th Chinese Communist Party Congress, where he won a precedent-breaking third term and consolidated his power to an extent not seen since the Mao Zedong era.

Video footage of the president excitedly prancing across a stage to shake hands with a patiently waiting Xi left no doubt who was the dominant of the two. The dynamics were not unlike recent Xi-Biden virtual meetings, which enabled Chinese media to show footage of Xi lecturing Biden, while the latter studiously took notes.

Such symbolic indications of power dynamics may lack substance, and they might not even reflect the tone of the overall discussion, but they matter.

Interactions like these obscure the simple fact that the U.S. far surpasses China in virtually all measures of power. Beijing knows this and is working hard to bridge the power gap, but somehow Biden—like many other U.S. presidents before him—seems incapable of acting in accordance with this reality.

Though the Biden administration has wisely not deviated substantially from former President Donald Trump’s firm approach toward China, his interaction with Beijing to date reveals a troubling over-eagerness to put the bilateral relationship on a more positive trajectory. In past administrations, Beijing has skillfully used this eagerness to its advantage, and if Biden is not careful, his administration will be no exception.

Biden’s eagerness to please Beijing was clearly on display Monday. While only those who attended the three-hour closed-door meeting know for sure what transpired, public readouts and the limited footage that was televised show Biden putting most of his emphasis on feel-good issues, such as avoiding conflict and cooperating on transnational concerns, such as climate change.

While Biden also brought up thorny topics such as Taiwan, Hong Kong, and Xinjiang, they did not feature prominently in the official reports of the meeting. Xi’s predictable rhetoric about win-win cooperation and China never seeking to supplant the U.S. may have been what Biden’s team wanted to hear, but it’s in stark contrast to Xi’s recent statements to internal audiences, including during the Communist Party Congress.

Another cause for concern is the last line of the White House readout of the meeting, which says Secretary of State Antony Blinken will visit China at an unspecified future date to “follow up on their discussions.” That Blinken will travel to China for this meeting and not the other way around implies that the U.S. wants the meeting more than China does, which shouldn’t be the case.

To some in China, it also conjures up images of a tributary state paying homage to the Chinese emperor. The biggest question, however, is why the meeting is taking place to begin with.

To be sure, senior-level communication between Washington and Beijing is positive from the perspective of managing differences and avoiding conflict. But if Beijing truly believes its rhetoric about being a benevolent rising power that seeks peace and coexistence with the U.S., it should allow its military leaders to resume dialogue with their U.S. counterparts. (China suspended bilateral military dialogues following House Speaker Nancy Pelosi’s visit to Taiwan in August.)

As far as restarting this dialogue goes, the ball is in Beijing’s court. Biden should be careful not to make concessions, no matter how small they seem, to restart a discussion that Beijing unilaterally suspended.

Past U.S. administrations have tended to act as if the bulk of the responsibility for the state of U.S.-China relations rested on their shoulders. They often went to great lengths to negotiate over the difficult problems in the relationship, resulting in concessions that were unnecessary and not in America’s interest.

The Biden administration should resist the urge to engage Beijing in excessive dialogue for the purpose of finding areas for cooperation or working toward an abstract notion of “progress” in the relationship.

U.S.-China relations are at a low point, but the tensions are largely driven by Beijing. China suffers more from the economic and diplomatic fallout of this tension than the U.S. But experience has taught Beijing that, as long as it holds its line, the American president will make concessions to ease tensions.

Biden’s overtures to Xi suggest that he may be on that slippery slope toward such concessions. The administration should change its approach and deal with Beijing from the position of confidence that’s appropriate for the most powerful country on Earth.