America’s Electoral System Is Suffering From a Credibility Crisis 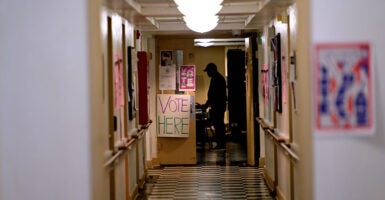 If the margins had been narrower, things might have looked very different. Gov. Tom Wolf, a Democrat, last year vetoed a commonsense measure that would have modernized Pennsylvania’s Depression-era voting laws. As a result, the Commonwealth is saddled with a ponderous mail voting system bolted onto a rickety election code that forbids routine practices like voter ID and pre-processing mail ballots. Those policies secure elections and speed tabulations, but were vetoed by Wolf last year.

Worse still is the prospect for litigation. The Pennsylvania Supreme Court recently ruled that Commonwealth election officials must respect the letter of the law and not count mail-in ballots with missing or incorrect dates on their protective envelopes. And yet on election eve, the Fetterman campaign filed suit to count mail-in ballots even if they were not marked with a valid date. In a tighter race, that suit would have snarled vote-counting and thrown the election to the courts.

Other states may not be so lucky. Arizona’s high-profile race for governor remains on a knife’s edge. Maricopa County tabulators failed at 1 in 5 polling sites on Election Day due to a printer error. County officials now estimate they won’t be done counting until nearly a week after Election Day, due in part to a deluge of last-minute mail ballots. Nevada, too, is struggling to count votes. Voters deserve election results that are timely and accurate. Clearly, there is still too much slack in America’s voting laws.

Effective reform has a few key elements. First, every state should adopt a photo ID law for every in-person or mail-in ballot. Vulnerable mail ballots should be protected with bans on organized vote trafficking by political operatives, and drop boxes—if they are used at all—should be secured, evenly distributed statewide, and available only during regular business hours.

We should have prompt and accurate election results. Ballots should be received by Election Day and states should take advantage of pre-processing to speed counting. Post-election audits and process reviews should be used to ensure that vote totals are accurate and that election officials followed the law. The private funding of election administration, with its corrupting influence, should be discontinued. And under no circumstances should noncitizen voting be permitted in American elections.

Even more fundamentally, election laws must be written by lawmakers, not courts or partisan lawyers like Marc Elias.

Across the country, the Left has used rogue courts to change voting laws for partisan gain. Nowhere is that more evident than North Carolina’s Supreme Court, where Democratic justices expedited a lawsuit so they could strike down North Carolina’s popular voter ID law before voters could elect a Republican majority to the court.

In another case, the court seized the power to redraw the state’s congressional maps to Democrats’ advantage. Their overreach has teed up a U.S. Supreme Court case, Moore v. Harper, that could bring an end to the anti-democracy antics of left-wing election lawyers.

When states reform election laws, the results speak for themselves. Georgia was the midterm election’s shining example of how to do it right. When Georgia lawmakers passed a popular election integrity law last year, liberals immediately smeared it as “Jim Crow 2.0.” Left-wing politicians like President Joe Biden claimed it would suppress the vote and spell the end for democracy itself.

As it turned out, early voting shattered election records while Election Day was drama-free with the longest lines reporting wait times of only 10 minutes. Even the result of the tight Senate race between Raphael Warnock and Herschel Walker—resulting in a runoff—was known by the next day. In short, it was an election in which it was easy to vote and hard to cheat.

Like Pennsylvania, some states—including Wisconsin, Michigan, and North Carolina—have failed to adopt commonsense election reforms due to intransigent governors, while other states like Arizona clearly have more work to do. And with a presidential election just two years away, now is the time to do it.

If our American democracy is at risk, it is because our elections have also been marred by confusion, dysfunction, and mismanagement.

Our electoral process suffers from a credibility crisis with many citizens harboring grave doubts about the legitimacy of future elections. States can ignore that, or they can follow Georgia’s lead and make it easier to vote and harder to cheat.