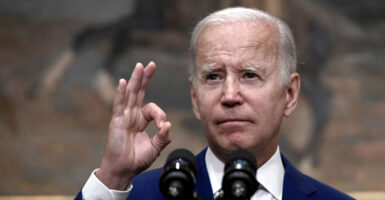 A federal district judge blocked President Joe Biden’s student loan bailout, holding that it is “an unconstitutional exercise of Congress’s legislative power and must be vacated.”

Biden’s plan cancels $10,000 of debt for borrowers who have federal student loans and make less than $125,000 per year, and $20,000 for borrowers who received a Pell Grant. Thursday’s decision from the Northern District of Texas is the first time a judge has assessed the plan’s legal merits, whereas previous rulings, including two high-profile dismissals, addressed only procedural questions.

The plaintiffs here were two borrowers whose student loans were not eligible for the maximum debt cancellation under Biden’s plan. One plaintiff’s loans won’t be canceled under Biden’s plan because they are held by a commercial entity, not by the federal government. The other plaintiff is eligible for $10,000 of loan cancellation, but not the maximum $20,000 because he did not receive a Pell Grant.

They brought this case before Judge Mark Pittman, a Trump appointee in Texas, alleging that the U.S. Department of Education should have made the plan available for public review and comment before implementing it, and that the department lacked the power to forgive student loans.

Before he could decide these issues, however, Pittman had to decide whether the plaintiffs had standing. To have standing, a plaintiff must have suffered a concrete injury caused by the defendant that a court can fix.

Both plaintiffs argued that they had standing because the Department of Education denied them their right to comment on the plan by disregarding the Administrative Procedure Act’s requirement to make agency actions available for public comment before putting them into effect.

The department responded that the Health and Economic Recovery Omnibus Emergency Solutions Act (HEROES) Act, which Biden is relying on to support his plan, expressly exempts actions taken under it from public notice and comment.

Pittman sided with the borrowers, reasoning that the court “must assume, for purposes of standing analysis, that Plaintiffs are correct on the merits of their claim that the Program was promulgated in violation of the APA.”

The government then contended that plaintiffs must demonstrate a harm that was concrete, not merely procedural, to establish their standing. But the court found that plaintiffs satisfied this criterion too because they had a concrete interest “in having their debts forgiven to a greater degree.”

Pittman then proceeded to the merits of the claims. First, he agreed with the government that the HEROES Act expressly exempts the department’s action from the usual notice-and-comment requirements even though that action had a legislative character that “grant[ed] rights, impose[d] obligations, or produce other significant effects on private interests.”

But Pittman concluded that the plan violated the substantive requirements of the Administrative Procedure Act because the HEROES Act failed to provide the department with debt-canceling authority. In so concluding, he relied heavily on the Supreme Court’s recent decision in West Virginia v. EPA. There, the high court held that where agency actions involve major questions of economic or political importance, the agency must have clear congressional authorization for its actions.

Biden’s plan, Pittman ruled, involved a major economic question because it will cost more than $400 billion and a major political question because Congress has been “engaged in robust debates” about it for years. So, the department was required to point to a clear congressional authorization, which it could not do.

First, as Pittman noted, the HEROES act “does not mention loan forgiveness.” Second, the HEROES Act requires the department to show that its plan is necessary to combat the COVID-19 emergency, which it did not do. And third, the department had never before claimed that the HEROES Act could be used to create a mass loan cancellation policy, and its new claim of “unheralded power” warranted judicial skepticism under West Virginia v. EPA.

Because Biden’s plan is unlawful, Pittman determined that it must be vacated, not simply paused.  The department is sure to appeal this ruling, and now the question is: Will it stand up on appeal?

The answer is: Probably not.

Pittman likely went astray in his standing analysis. He is right that the Department of Education does not have the power to cancel student loans with the HEROES Act, as the authors explain at length here, but standing is a prerequisite.

Pittman’s conclusion that the plaintiffs have suffered a procedural injury relied on the assumption that the plaintiffs’ were right on the merits: that the department was required by the Administrative Procedure Act to make the plan available for public comment. But as Pittman himself concluded when he turned to the merits analysis, the department was not required to do so. That undermines his conclusion about standing.

Pittman seemed to suggest, without expressly saying, that plaintiffs might also have standing because “failure to receive benefits is enough” for standing. To support this conclusion, he relied on two cases: Associated General Contractors v. Jacksonville and Bowsher v. Synar. The problem is that these two cases don’t actually stand for that broad proposition.

Associated General did involve a denial of benefits, but the benefits were denied to members of a group on the basis of their race. The operative injury was the denial of equal treatment, not simply the denial of a benefit. And in Bowsher, the injury was the cancellation of an ongoing benefit, not the denial of a new one to which nobody was previously entitled. So, these cases are not much help to the plaintiffs here.

Accordingly, the odds are low that Pittman’s order withstands appeal.

It is, of course, a shame that Biden’s plan has proved hard to challenge. Besides being unlawful, it is deeply unfair and destructive of the rule of law. Still, there are several other plaintiffs out there who have much better standing arguments. They are likely to succeed where the plaintiffs here may fail.