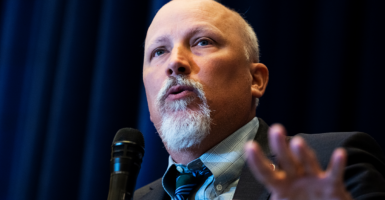 "While some are suggesting a so-called COVID amnesty, we are instead asking ... for accountability for the lies and the injustice resulting from government response to COVID," says Rep. Chip Roy., pictured during the America First Policy Institute's America First Agenda Summit on July 26, 2022. (Photo: Tom Williams/CQ-Roll Call, Inc/Getty Images)

The hearing, which lasted roughly two and half hours, addressed topics such as lockdowns during the pandemic, vaccine efficacy, and the impact of Big Tech censorship.

“For the first time in American history, public health bureaucrats ground the strongest economy in the world to a halt. Shut down businesses they deemed ‘non essential’ and forced an initial 14 million people out of work,” Roy said.

They forced the elderly to die alone in hospitals and nursing homes with no loved ones at their side.

They forced fathers out of delivery rooms, separated from mothers in labor with their own children.

They forced Americans, including our military, our border patrol, our nurses, and first responders to choose between losing their paycheck and taking a vaccine – a vaccine that received immunity from liability while makers such as Pfizer and Moderna banked a $100 billion in profits.

Roy also discussed the consequences of lockdowns, specifically the record-number of drug overdoses and teen suicide during the lockdowns.

“We now know lockdowns had no effect on reducing COVID-19 mortality and instead we got 108,000 dead Americans from drug overdose deaths – the most in American history. We got a 100% increase in teenage alcohol and drug-related deaths,” Roy said.

We got children attempting suicide at higher rates, we got historic learning losses not seen in 30 years, and a broken economy with record inflation.

Americans are dead, lives have been destroyed, and our nation is weaker because of reckless government decisions – federal, state, and local.

Let me be clear: while many beg for amnesty, these actions demand accountability.

2. Dr. Scott Atlas shared two things that “stunned” him in the COVID-19 pandemic.

“There were two things that stunned me in this pandemic. No. 1 was this incredible power of the government to shut down everything, to tell people they can’t mingle with their own parents, to shut down schools, to shut down businesses,” Atlas, a member of the White House Coronavirus Task Force during the Trump administration, said.

“But the bigger surprise was the acquiescence of the American people,” he added.

3. An epidemiologist explained why he “was scared for about 10 minutes” when COVID-19 first hit.

“At the beginning of the pandemic, I was scared for about 10 minutes,” Dr. Martin Kulldorff, an epidemiologist and Harvard University Department of Medicine professor, said.

“When the virus hit Northern Italy and Iran, which were the first places outside of Wuhan, it was clear to me that this would be a worldwide thing, the virus would reach every corner of the world,” Kulldorff, who co-authored the Great Barrington Declaration, added.

But I looked at the data from Wuhan, the very earliest data on mortality and the age of people who die from it, and from that it was obvious through a few minutes of calculation that there was more than a tenfold difference in the risk of mortality from COVID.

So, anybody can get it, obviously. But, the risk was more than a thousandfold by age. So, as a parent, I, like most parents, I value my children’s lives more than mine, so from this I knew that they were going to be fine.

“What effect does medical censorship have on the medical profession and the field of science broadly?” Roy asked.

“It’s a disaster. It’s a disaster. When you have a new disease like this, a new epidemic like this, it is absolute vital to get the honest ideas and opinions of every expert no matter what conclusion they come to,” Dr. Jay Bhattacharya, a professor of medicine at Stanford University, said.

“You learn the truth by this kind of debate. What censorship did is, is it’s not just that it suppressed the voices of the people that were censored, although that was bad enough, it sent a signal to other scientists that, ‘look, these areas are too controversial, stay out of them otherwise you’re going to lose your reputation, too,'” Bhattacharya, who also coauthored the Great Barrington Declaration, said.

Bhattacharya said this resulted in an “illusion of a consensus that never existed on so many topics.”

“We robbed the American people of a true debate, a true discussion about this. I mean – it’s not that … we’re always right. I mean, Lord knows that’s not true,” Bhattacharya said.

5. All three doctors said it was not “wise” to force U.S. service members to take the COVID-19 vaccine.

“To be frank, I’m downright disgusted that our service members are being forced out by [President Joe] Biden’s woke military. This is unacceptable, and we will not rest until there is justice,” Rep. Andrew Clyde, R-Ga., said.

“My question to you is this. You know, we’ve talked about young men and the risk of myocarditis. Well, what is the military full of? Young men. Young men in their twenties. So, do you think it was wise for the Department of Defense to force the COVID vaccine on young men and women in uniform?” Clyde asked.

“There’s no scientific basis to have that policy. None,” Atlas said.

“It’s been two and a half years since the deaths of my in-laws, Mickey and Dee Newman, who contracted COVID-19 in their separate elder care facilities here in New York. Our families were never notified of Gov. [Andrew] Cuomo’s mandate to send over 9,000 COVID-positive patients into New York nursing homes, and we still don’t know why he decided to do it,” Dean, Fox News’ senior meteorologist, said.

“There were other facilities provided by the federal government he could have used like the USS Comfort ship and the Jacob Javits Center. Those went virtually empty, and instead his health department decided to put the sickest people into the places where our most vulnerable resided,” Dean said.

Dean has been one of the most vocal critics of Cuomo’s actions and has been leading the charge to hold the former New York governor accountable.