Walker and Warnock Neck and Neck in Georgia Senate Race 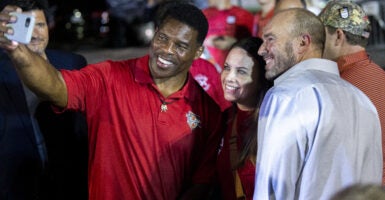 With 98% of the vote counted early Wednesday, Warnock had 49.4% to Walker’s 48.5%, with each candidate garnering about 1.9 million votes, the Associated Press reported.

In Georgia, if no candidate wins 50% of the vote, the top two finishers must compete in a runoff in four weeks. Chase Oliver ran as the Libertarian Party candidate in the Senate race.

Walker, a former college and professional football player, and Warnock, senior pastor at Ebenezer Baptist Church in Atlanta, were both well-known figures in the Peach State before entering politics.

Georgia proved again to be a pivotal contest in deciding which party controls the Senate, currently split 50-50 with Vice President Kamala Harris ready to cast a tie-breaking vote to give Democrats a functional majority with the support of two independents.

“I voted all Republican because I don’t like how things are trending,” Steve Peterson told The Daily Signal early Tuesday after voting at a local church in Lilburn. “I want constitutionalists on the Supreme Court, so I want the Senate on the Republican side.”

But another Lilburn voter, Haseem Hironi, cast his vote in the opposite direction.

“I voted Democrat,” Hironi told The Daily Signal shortly after voting. “I believe they represent my views and interest and how I want the country to be run.”

Warnock, 53, won the Senate seat in a special election in Georgia in January 2021, defeating the incumbent Republican, Sen. Kelly Loeffler. His victory then, along with that of fellow Democrat Jon Ossoff over Georgia’s other Republican incumbent, Sen. David Perdue, gave Democrats their working majority.

Walker, 60, faced several personal issues, as women who asserted they were ex-girlfriends came forward to allege that the pro-life candidate pushed them to get abortions.

“There is a lot to Herschel Walker besides athletics. He was also successful in business,” Sheri Mitchell, a Gwinnett County voter, told The Daily Signal. “He has apologized for his past mistakes, and that makes a difference.”

Meanwhile, Warnock and a nonprofit affiliated with his church came under scrutiny for evictions of low-income residents from an apartment complex—in one case for as little as $28 in unpaid rent.

In the final stretch of the campaign, former President Barack Obama stumped for Warnock.

“I voted for Warnock because Herschel just looked like he didn’t know what he was doing,” Mimi Obong of Norcross told The Daily Signal. “I felt like I’d rather go with someone who looks like they know what they are doing than somebody who I think maybe someone else put you up to this and somebody else is pulling your strings. I don’t want that representing me.”

Former President Donald Trump backed Walker in both the Republican primary and the general election.

Warnock and Walker took increasingly swipes at one another, with Warnock calling Walker a “pathological liar” and Walker accusing Warnock of voting with President Joe Biden 96% of the time.

This marked Georgia’s first general election since passage of SB 202, a measure that expanded voter ID to apply to absentee ballots. Some well-known Democrats called the new law “Jim Crow 2.0” and asserted that it would make it more difficult to vote.

The Biden administration’s Justice Department sued Georgia over the voting law, alleging “voter suppression.” The Justice Department announced Monday that it would send election monitors into 64 jurisdictions across 24 states, including the Georgia counties of Fulton, Cobb, and Gwinnett.

The Daily Signal interviewed voters in each of these three counties as they left polling sites on Election Day.

“I haven’t had issues. I’m pretty sure there have been issues in other places,” Obong told The Daily Signal. “It just so happens that I’m in Gwinnett County. I’ve voted here for several years and I’ve never had an issue. I could imagine if I looked somewhere else and the funds just weren’t there, it could be an issue and it would deter me from voting.”

Corrine Stroud, from Marietta in Cobb County, said she didn’t vote early because she enjoys the feeling of voting on Election Day. Stroud, who is black, added that she hasn’t experienced voter suppression, but believes it is going on elsewhere in Georgia.

Jeff Sizemore, of Sandy Springs, said voting was “simple” as he exited a public school building in Fulton County.

“I just came in, there was no wait. I was in and out in two minutes,” Sizemore told The Daily Signal. “I don’t see how you don’t have to provide some ID proof that you are voting. It seems very logical to me.”

The results in this article have been updated since initial publication.